Europe and the Middle East

Research Group on the Global Future

The on-going transition processes in the Middle East and North Africa offer a historic opportunity for the region itself, but also for Germany and Europe as partners of the Arab world. Meanwhile, the transformation countries are faced with considerable political, societal, and economic challenges and the regional security environment is getting ever worse.

The building of human capacities and networks of societal stakeholders are seen as key activities to contribute to the continuation and the consolidation of the transformation processes and to support a political culture of accountability, transparency and participation.

Against this background, the Center for Applied Policy Research (C·A·P) of Ludwig Maximilian University of Munich, with the support of the Federal Foreign Office and the zivik program of the Institute for Foreign Cultural Relations (IFA), and in collaboration with partners across North Africa launched in 2012 a set of programs that aim at promoting and networking young leaders, representatives of civil society, political parties, media, private sector and academia from Arab countries and Europe. The project includes workshops and trainings to strengthen conflict resolution and decision-making competences and to enhance communication and management skills. Moreover, it aims at developing further the strategic understanding of the political and socio-economic challenges the transformation countries are faced with.

The programs offer orientation without providing ready-made plans. Together with partners and participants, the programs develop ideas, methodologies and models on how to enhance a political culture of participation, civic engagement and political pluralism.

In 2012, 2013 and 2014 respectively, two rounds of the "Young Leaders Forum" were successfully conducted with workshops in Berlin, Cairo, Tunis, and Munich. The third round of the "Young Leaders Forum" is taking place in 2015. In the program’s fourth year, the C·A·P continues its established, successful cooperation with the Tunis-based Arab Institute for Human Rights (AIHR) and the Union des Tunisiens Indépendants pour la Liberté (UTIL). Besides, a new cooperation partner could be found in the Moroccan University Hassan I.

Since 2012, the C·A·P has also been conducting a series of "Civic Education Workshops" across the region. The workshops are implemented in collaboration with Arab partner institutions and target young adults who have an interest in political and social issues and are politically engaged in their communities. They are offered trainings in methodologies for conducting political and civic education programs as well as chairing and moderating political discussions and citizens forums. This strengthens them in their capacity as community leaders and enhances a network of experienced trainers for civic education programs, thereby facilitating the dissemination of political skills and competences. The workshops focus in particular on civil society structures on grass-roots level and on NGOs that represent socially and politically marginalized groups. Within the program a manual for community leadership was developed that is now being used by Arab trainers and NGOs to conduct workshops independently.

In addition, since 2016 the C·A·P conducts the program "Policy Advice and Strategy Development" within the framework of the Tunisian-Bavarian Action Plan 2016-2018 of the government of the Free State of Bavaria and the Ministery for Development, Investment and international Cooperation of the Republic of Tunisia. In cooperation with the Union des Tunisiens Indépendants pour la Liberté (UTIL), the Arab Institute for Human Rights (AIHR) and the Faculty of Legal, Political, and Social Sciences of the University of Carthage the program offers training to Tunisian academics, professionals and activists in the areas of policy advice, strategy formulation, and strategy implementation in specific policy fields such as rule of law and citizens’ rights, governance, security, economy, social affairs and many more.

With its paper series the "Policy Advice and Strategic Development" programme builds on and develops further the project work of the "Young Leaders Forum 2015".

The project is financially supported by the German Federal Foreign Office. 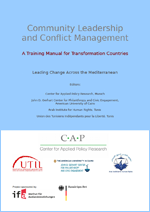 Policy Advice and Strategy Development
New round of workshops started in Tunisia
20.06.2019 · C·A·P

Leading Change across the Mediterranean
Tunisian Experts on Public Policies have successfully completed the “Policy Advice and Strategy Development” series of workshops
20.12.2018 · C·A·P

Social Entrepreneurship in the MENA Region: For Inclusion and Sustainable Development
C·A·Perspectives on Tunisia No. 01-2018
21.11.2018 · C·A·P

Policy Paper and Forum on Social Entrepreneurship and Technology
Analysis and Event in the framework of the Bavarian-Tunisian Policy Advice and Strategy Development Program
15.11.2018 · C·A·P

Beyond the Arab Spring
Conference on Transition Dynamics in MENA Region
03.12.2017 · C·A·P

Challenging smuggling, the informal sector and underdevelopment in Médenine
C·A·Perspectives on Tunisia No. 01-2017
13.10.2017 · C·A·P

Policy Advice and Strategy Development
New round of workshops started in Tunisia
05.05.2017 · C·A·P

Visit of Franz Maget to C·A·P
Tunisia remains in the focus of German and Bavarian foreign policy
21.11.2016 · C·A·P

Young Leaders Forum
Turkey after the elections: implications for the Middle East and Europe
26.11.2015 · C·A·P

Training of Trainers on Challenges of Modern Societies in Egypt
Cooperation of C·A·P with the Goethe-Institut Cairo and the Tahrir Lounge Cairo
26.10.2015 · C·A·P

Research workshop on the Sinai
Leading Change Across the Mediterranean
17.12.2014 · C·A·P

Leading Change Across the Mediterranean 2014
Meeting of the German network members in Berlin
23.09.2014 · C·A·P

Leading Change Across the Mediterranean
Planning Workshop in Tunisia
28.05.2014 · C·A·P

Tunisian experts on decentralisation and elections at C∙A∙P
Discussion with Michael Weigl about politics in Bavaria
24.03.2014 · C·A·P

Workshop on Political Consulting
C·A·P, Institute of Near and Middle Eastern Studies and Research Group "Tunisia in Transition"
28.10.2013 · C·A·P

Recent political developments in the Middle East
Discussion with Professor Mohammed Ayoob at the C·A·P
16.06.2013 · C·A·P

Transformation Partnership with Egypt
Seminar with the American University Cairo and the Cairo University on  Applied Policy Research
15.05.2013 · C·A·P

Workshop with community leaders in Tunisia
Civic education and training program of the Leading Change Across the Mediterranean project
15.12.2012 · C·A·P