ISIS in Egypt's Sinai: The next regional hotspot in the making

Ismail Alexandrani: ISIS in Egypt's Sinai: The next regional hotspot in the making, C·A·Perspectives · 1 · 2015 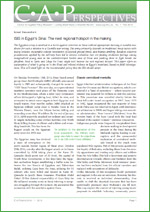 
The Egyptian army is involved in a battle against terrorism in Sinai without appropriate training or suitable readiness for such a mission in a Guerilla war setting. The army primarily depends on traditional troop tactics with heavy vehicles, vulnerable column movements of exposed ground forces, and blanket artillery. Random collective punishments applied by the military have led to serious violations that are feeding vindictive feelings among marginalized young men in the underdeveloped border area of Sinai and pushing them to fight beside the Jihadists. Next to Syria and Libya the Sinai might well become the next regional hotspot. This paper offers an explanation of what is going on in the Sinai and related violence in Egypt's mainland, based on field investigations. This will shed light on the recommended policy that the EU should adopt.