Deepened relations between Bavaria / Germany and Tunisia by late 2016

Towards the end of 2016, various events have deepened relations between the Free State of Bavaria and the Republic of Tunisia 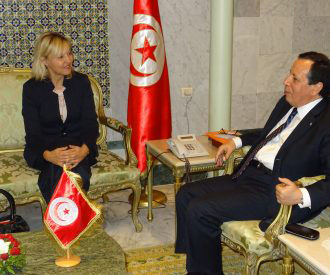 Bavaria and Tunisia concluded a partnership agreement in December 2012 whose aim is to strengthen the democratization process in Tunisia as the starting point of the Arab Spring, and to strengthen ties between Tunisia and Bavaria. The cooperation supported by an action plan covers, inter alia, the areas of economy, vocational training, the environment, civil and disaster protection, as well as the subjects of justice and constitutional law, civil society and the role of women in society. The Bavarian State Government has also included Tunisia as the main focus in the Special Program “Bavaria 2016-2018 - Prospects for refugees in their home countries” with the aim of strengthening stability in the North African states. Projects are to be supported under the special program.

The Center of Applied Policy Research (C·A·P) together with Tunisian partner institutions is involved in the bilateral action plan with its “Policy Advice and Strategy Development” project.

TAG Forum 2016 at the Bavarian State Ministry of Economy

On 12 November 2016, The Tunisian Academicians Association Munich (TAG) in cooperation with the Bavarian State Ministry of Economy and Media, Energy and Technology invited to its 5th Forum which is considered a major platform for career, networking and B2B.

Together with companies from Germany and Tunisia which, like TAG, see a great, undiscovered potential in the relations between both countries, approximately 100 participants gathered in Munich to exchange business cards and views on Tunisia and the country’s relations with Germany in general and Bavaria in particular. 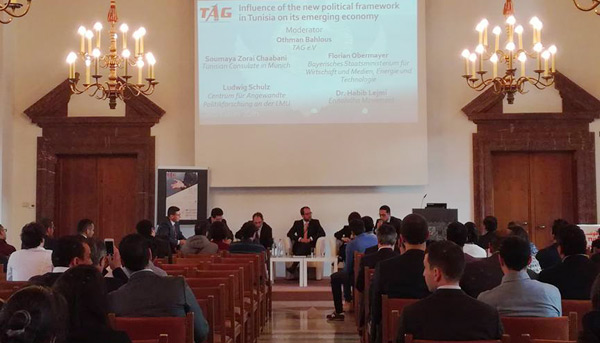 On various panels, company representatives, civil society actors as well as responsibles for the relations informed the public about economic, political and social potentials and challenges. On one panel, H.E. Soumaya Zorai, Consul of the Republic of Tunisia in Munich, discussed the topic of “Influence of the new political framework in Tunisia on its emerging economy” with Florian Obermayer, Bavarian State Ministry for Economy and Media, Energy and Technology, Dr. Habib Lejmi from Ennahda, and Ludwig Schulz, Center for Applied Policy Research (C·A·P).

Tunisia 2020 with German and Bavarian participation

Over 2,000 participants – among them prime ministers, other officials, and CEOs from the United States, China, EU countries and many more countries, including Bavaria – attended the Tunisia 2020 conference, which took place in Tunis from 29th-30th November. The aim of the conference was to attract investments and grants in order to support the Tunisian economy, where the government is facing a number of issues, such as a high level of unemployment and other economic problems.

Hoping to gather up to USD 30bn to invest in 145 projects over the coming four years, during the two-day international conference Tunisia was pledged USD 14.7bn-worth of loans and grants. Announcements included deals with international and regional financial institutions, among them a USD 1.5bn loan from the Arab Fund for Social and Economic Development (AFESD) for infrastructure projects, to be rolled out over five years at 2.5% per annum interest and a 30-year repayment term. The AFESD also pledged to donate USD 1m for water supply investment in southern Tunisia.

Tunisia’s government and the World Bank also signed a technical cooperation protocol for public-private partnerships. The new partnership strategy between Tunisia and the World Bank for 2016-2020 provides USD 1bn in financing each year, plus a USD 300m contribution from the International Finance Corporation (a World Bank arm). The European Bank for Reconstruction and Development (EBRD) will meanwhile allocate at least EUR 650m to Tunisia in the next five years to support the private sector and to fund infrastructure and energy projects. In addition, the European Investment Bank (EIB) signed several financial deals for projects including roads, Mediterranean coastal water quality preservation, electric power distribution and the development of 4G mobile networks, also earmarking funds for the Central Bank of Tunisia. EIB president Werner Hoyer declared that financial support to the Arab country is set to reach EUR 2.5bn by 2020. The Tunisian government and the EIB also signed a joint statement on the financing of EUR 2.5bnworth of infrastructure projects.

Elsewhere, the Saudi Fund for Development granted Tunisia a USD 800m loan at 2% interest, with repayment due in 20 years, for development projects and export support, while Qatar will provide USD 1.25bn to strengthen Tunisia’s economy and development. The Kuwaiti Fund for Arab Economic Development (KFAED) offered USD 500m in credit over a fiveyear period for regional development, the African Development Bank (AFDB) announced that it would lend Tunisia up to EUR 2bn over the next five years, while France promised EUR 1.06bn and Italy EUR 560m in loans and aid. 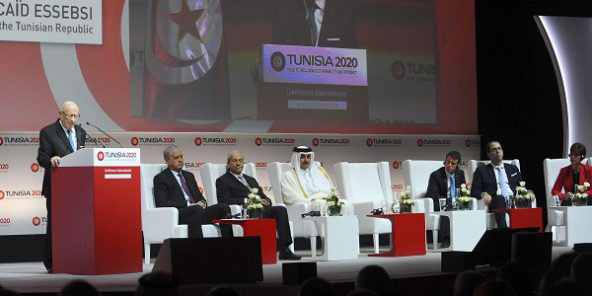 Ludwig Schulz, being present at the conference, too, underlined in Tunisian media outlets that the conference can be considered a major success for the whole country, attracting investments and interest from all over the world as well as showing the country’s willingness and preparedness for reform and modernization. Besides “big money” for major investments, however, there is also the urgent need to bridge the deep socio-economic gap between the central and the remote regions of the country and to invest in and strengthen the capacities of youth and women in order to broaden the scope and to raise the sustainability of social liberalization. Huge potential lies further in enhancing the level of integration between Tunisia and Europe.