Beyond the Arab Spring 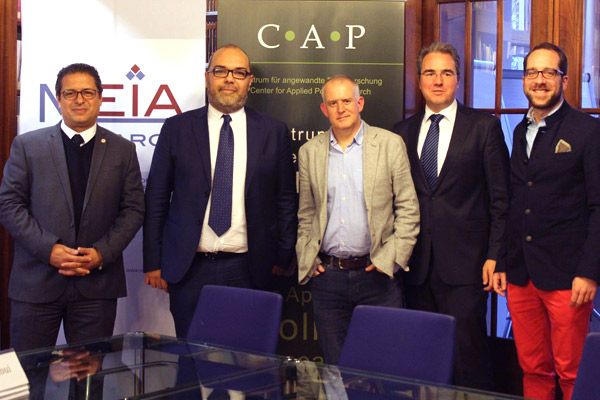 On 28 November 2017, C·A·P hosted three distinguished speakers and an auditorium full of experts and interested guests on the occasion of its conference "Beyond the Arab Spring: Political and Socioeconomic Transformation across the Middle East and North Africa". The event had been co-organized by the Middle East and International Affairs Research Group (MEIA Research) and the Tunis-based Union des Tunisiens Independents pour la Liberté (UTIL), and was supported by the Bavarian Government and the US Consulate General Munich. It took place within the Policy Advice and Strategy Development Project that the C·A·P organizes in cooperation with UTIL, the Arab Institute for Human Rights and the Faculty of Juridical, Political and Social Sciences of the University of Carthage, Tunis.

The event's aim was to discuss the causes and consequential dynamics of the uprisings across the MENA-region that erupted seven years ago. A special focus was put on Tunisia which is considered the only country where a genuine democratic transition has been taking place since then. Following a warm welcome by Ludwig Schulz, head of the Middle East / Leading Change across the Mediterranean Program at C·A·P, and his thanks to the organizers and supporters, the experts' inputs and the subsequent discussion with the audience was moderated by Michael Bauer, Vice Chairman of MEIA Research. 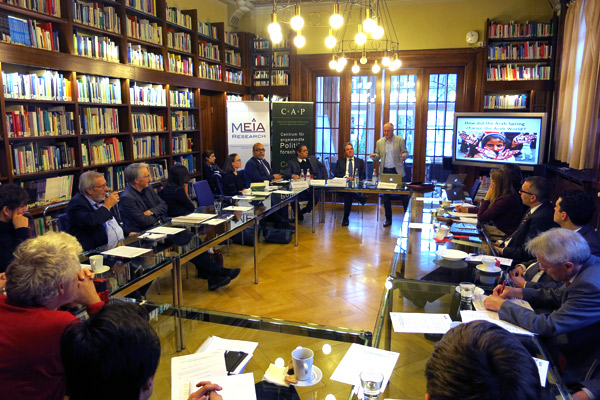 In his initial lecture, Prof. Dr. Andrew Reynolds, Professor of Political Science at the University of North Carolina at Chapel Hill and currently Visiting Scholar at the Hertie School of Governance Berlin, reflected the causes and dynamics that led to the uprisings of 2011 and the fall of the authoritarian regimes in Tunisia, Libya, Egypt and Yemen, to adaptive reforms in Morocco, Jordan and some other monarchies, as well as to the wars in Syria, Libya and Yemen. A decisive factor of the initial dynamics in each case, according to Reynolds, were the political standings, intentions and capacities of the military forces; furthermore (im)balances in the relations between military and civil actors, between government and opposition groups, in- and outsiders etc. have been shaping the subsequent transitions that had either led to a breakdown of the political order and a change in leadership, or in a crackdown of the revolts and to leadership continuity. Reynolds continued to elaborate a matrix on the transition outcomes in the cases of Tunisia, Egypt, Libya and Yemen so far, around the question when repressive power is robust, arguing largely in favor of the path of democratic transition that Tunisia has taken. 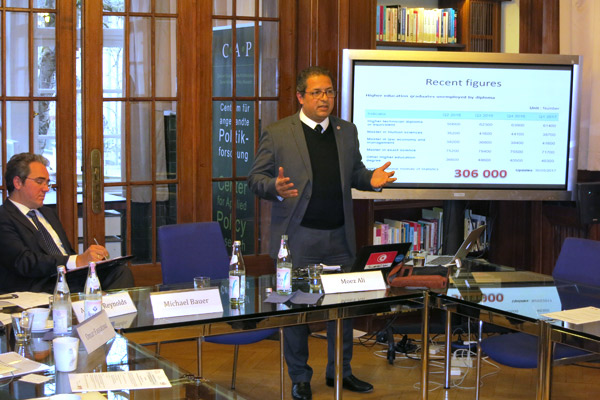 This latter, quite optimistic focus on Tunisia had then been reflected by the two expert speakers from that country where the dynamics in 2010/11 had started. At first, Moez Ali, President of UTIL, expressed his critique on too optimistic views and notions of the "Arab Spring" which has so far rather been a continuous winter for the people in the region as most of the socio-economic problems that had led to the uprisings in 2011 have not been resolved, and, even more serious political problems have been added on top. Moez Ali admitted that Tunisia developed better than its neighboring country to the east as well as other countries in the region, as the country remains largely safe for its citizens, and its political institutions and reform dynamics are slowly progressing, especially because an active and critical civil society is constantly monitoring political developments and pressing for stability and democratic reforms. However, the relevance of identity politics, deepening fragmentization and social instability, had been largely disrespected by analysts, observers and international supporters, old and new elites as well as Islamists have been trying to take control of the established state structures instead of creating a new structure for the sake of a true democratization, and corruption, clientelism and patronage continue to harm the country’s political, economic and social cohesion. Maybe even most dangerous is the threat of radicalized fighters returning from the wars in Syria and Libya and the lack of a strategy on deradicalization and resocialization. A joint, international effort to counter this threat is as important as continuous support for Tunisia’s civil society organizations which can be considered the sole defenders and claimers of the revolution’s divide. 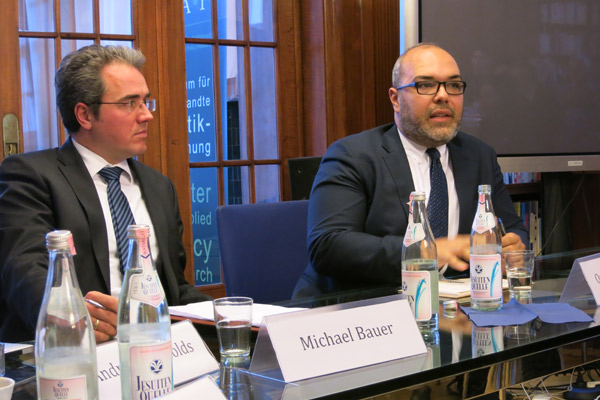 As a third speaker, Omar Fassatoui, PhD, Lawyer and Human Rights Officer at the Office of the United Nations High Commissioner for Human Rights (OHCHR) in Tunis, elaborated on the challenges of women and minority rights in Tunisia since the revolution. Making clear that naming women's rights and minority issues in one context may be misleading in the first sight, as women are actually in the majority in Tunisia, Fassatoui explained that what does count as negatively for both is the lack of access to rights due to institutional and/ or gender related constraints and blockages, and the seriousness of discrimination especially when factors leading to a weakened position in the social order come together, such as in case of girls and women from rural areas, girls and women with non-Arab ethnic minority, non-Muslim religious or with non-heterosexual background. Emphasizing that modern Tunisia has ever been at the forefront of women’s rights since the tribal social structure had been removed and women’s rights had been constitutionally enshrined in the 1950s, the post-revolutionary Tunisia should finally reach the level of liberal democracies in which gender disparities must be fought effectively, rights and the access to them are protected by law and where public awareness on women and minority issues is established. Regional disparities and access to information as well as international support to Tunisia’s civil society groups active in this field pf public policy are crucial. 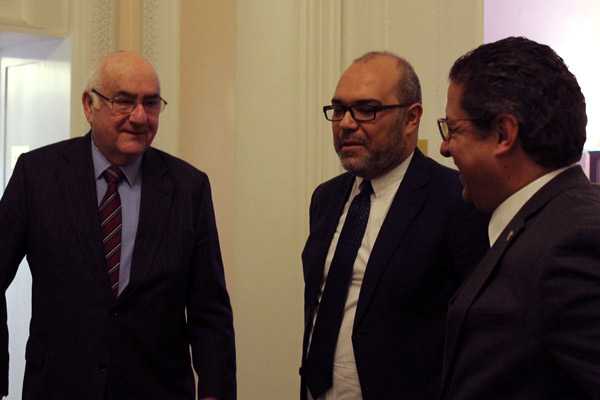 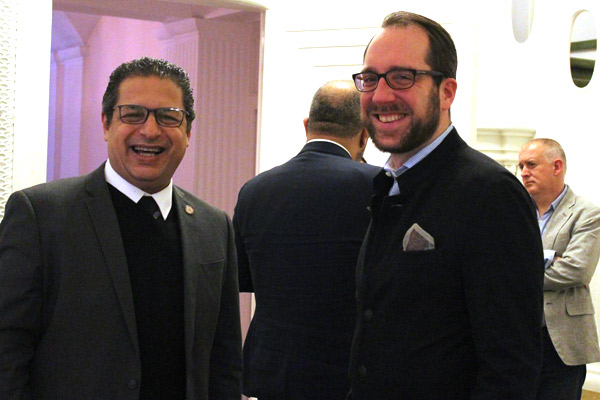