Turkey after the elections: implications for the Middle East and Europe 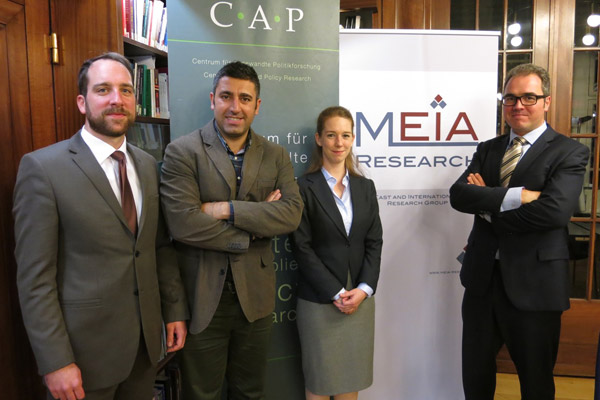 In these times of destructive instability in the Middle East and the resulting mass migration towards Europe, once again Turkey comes in the focus as potential mediator and anchor of stability. Yet, after the recent elections, the uncertainty about the future of Turkish domestic and foreign policy is high. Even more so, it was a great pleasure to welcome Prof. Sezer Özcan from the Hasan Kalyoncu University Gaziantep for a round table at the C·A·P on November 12th. Along with Turkish policy experts Ludwig Schulz and Christine Straßmeier, Michael Bauer who took the task of moderating the discussion completed the panel. After a few introducing words by Prof. Weidenfeld, a vivid and in depth discussion ensued under the title Turkey after the reelections and in the refugee crises: Implications for Europe and the Middle East. The topic provoked many critical questions and remarks in the audience, so that even after almost an hour of overrun, the discussion had to end due to lack of time. Nonetheless, it was a very successful evening that offered a lot of insight into a very complex, yet fascinating issue.