Tunisian experts on decentralisation and elections at C∙A∙P

Discussion with Michael Weigl about politics in Bavaria


At the beginning of 2014, Tunisia got its transition process back on track with the adoption of a new constitution and a provisional caretaker-government. However, one of the main challenges remains to be solved: the economic and political empowerment of the "hinterland" in a country, which was governed by a centralized authoritarian regime for decades and experiences an increasing gap between the rather flourishing coastal regions and persistent poverty in the South and West. Now, decentralisation features prominently in the new constitution and Tunisian experts are working on how to put that principle into practice and to establish a "local democracy" in their country. 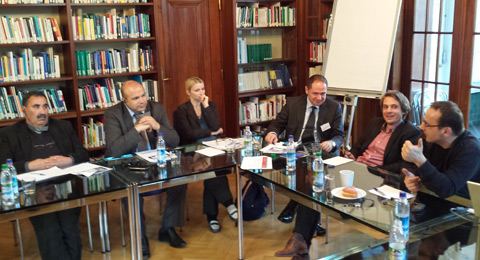 Against this background and in the framework of the Bavarian-Tunisian Partnership a high-ranking Tunisian delegation visited Bavaria on the occasion of the latter’s municipal elections in March 2014. It consisted of officials, both from government and the independent authority in charge of organizing the elections (ISIE), as well as academics and representatives of civil society organisations, monitoring the democratic transition. The visit, which was organized by the Bavarian State Chancellery and the GIZ, included also a roundtable discussion at the Center for Applied Policy Research. In his presentation, Michael Weigl, head of the research group on Germany at C·A·P, presented the political system and the landscape of politcial parties in Bavaria. He pinpointed, among others, to its often fragmented and complex multi-level character. Edmund Ratka from C·A·P’s Middle East section moderated the following intensive discussion. Drawing connections to the evolving political landscape in their own country, the Tunisian experts were particularly interested in specific local and regional phenomena in Bavaria such as the Independents or "Freie Wähler". Both German and Tunisian participants agreed on the importance of the sub-national level to engage citizens and to build up or maintain a democratic culture.