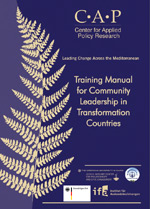 
With the publication of the “Training Manual for Community Leadership in Transformation Countries”, the Leading Change Across the Mediterranean Project has reached another milestone.

The drafting of the manual has been based on a comprehensive and participatory deliberation process that involved trainers, young leaders and researchers from Tunisa, Egypt, Libya, the Czech Republic and Germany. 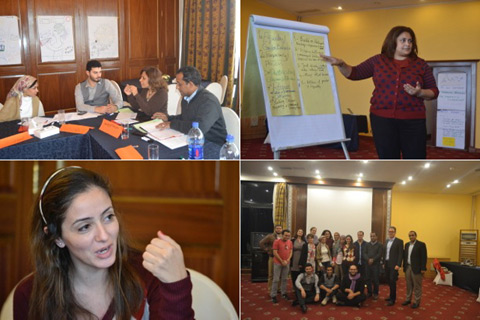 The process started with first planning workshop in June 2012 in which the target group „community leaders“and appropriate workshop formats were specified. In September 2012 a workshop in Sidi Bou Said developed methods for these community leader workshops and set criteria and indicators for success. After running two test-workshops (one in Egypt, one in Tunisia), an evaluation session was conducted in Cairo in December 2013. In this workshop a roadmap for the developing the training manual was set. Based on the preparation done throughout 2013, an editorial team from Germany, Tunisia and Egypt developed a sketch for a manual for Community Leadership in October 2013 in Sidi Bou Said. In November 2013 a first version of the manual has been printed in English and Arabic.

For testing possibilities of implementing the manual, from December 5-8, 2013, a Train-the-trainer workshop was being held in Cairo. 18 participants from Egypt, Tunisia, Germany and the Czech republic took part.

The manual was being discussed, sample activities could be experienced and the participants developed steps of implementation for their countries.