C·A·P, Institute of Near and Middle Eastern Studies and Research Group "Tunisia in Transition" 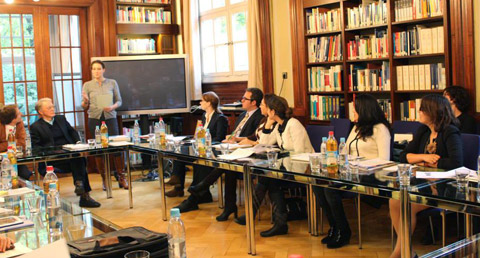 Anne Leiding, Senior official at the Bavarian Chancellery, is speaking about government consultancy in front of representatives from several European and Arab universities and research institutions.

The Center for Applied Policy Research (C·A·P) hosted a workshop on "Political Consulting" which was jointly organized with the LMU's Institute of Near and Middle Eastern Studies and the DAAD-funded Research Group "Tunisia in Transition". The objective of the workshop has been to exchange best practices about political consulting and to discuss professional perspectives in this field both in Europe and in North Africa. Chaired by Dr. Reinhardt Rummel and Edmund Ratka, the workshop gathered about twenty young researchers from German and Tunisian universities as well as representatives of public and private consulting bodies. Speakers included Dr. Mathieu Rousselin from the Center for Global Cooperation Research at the University of Duisburg-Essen, Dr. Anis Ben Amor and Selima Ben Salem from the University of Carthage, Daniela Hobi from the Swiss Think Tank "Foraus", Anne Leiding from the Bavarian State Chancellery, Christine Straßmaier from the private consultancy "Corporate Trust" and Ludwig Schulz from C·A·P. The event has been inaugurated by a welcome speech of the Tunisian Ambassador in Germany, Elyes Ghariani.