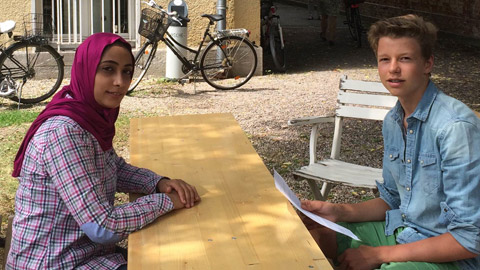 You have taken part in the Tahrir Lounge Geothe project in Cairo. What did you do there?

I have been working as a media and program coordinator at Tahrir Lounge Goethe project since September 2013. My responsibilities in the project mainly include communicating with journalists on the project activities, suggesting ideas for workshops and seminars, carrying out researches and preparing future activities. I also participate in organizing seminars and open discussions and coordinating with the speakers. The German Embassy in Cairo has supported and funded the project since its inauguration in April 2011.

Tahrir Lounge Goethe is a neutral platform, standing at the same distance from all society actors. The project raises different topics for discussion and simplifies information to be delivered to different community sectors, in order to create a state of social awareness. We aim at embracing youth from all ideological backgrounds and helping them to discover themselves and hone their skills in order to participate in the social change. Our main focuses are on civic education, creativity, women, education and environment. In this regard, we conduct workshops, seminars, public discussions, awareness campaigns, puppet theatres, movie screenings, etc. I believe we had a major success during the last two years, as our turnover has reached more than 500 applicants in some workshops.

Currently you are a fellow of the CrossCulture Internship Program. What is your current research interest at C·A·P?

I was lucky to be granted the internship in the field of International Relations and civic education funded by the ifa (Institut für Auslandsbeziehungen) and the Federal Foreign Office. The CrossCulture Internship programme is dedicated to young professionals and volunteers from countries with a predominantly Islamic population. It offers youth the opportunity to explore the German culture, expand their professional networks, and promote international exchange between the interns and their host organizations.

I have started attending my internship here at C·A·P on the 6th of July and I will finish it on the 22nd of September. I am working within the Middle East Projects, particularly in updating the section of country profiles on the center’s website. Furthermore, I am an organiser in the Young Leader Forum of 2015 in Berlin that offers me a great opportunity to network with activists from Morocco, Tunisia and Germany.

How did the protests movements evolve after the government of Mubarak?

I believe that after people succeeded in toppling the Mubarak regime, they realized that their demands could be met through pushing the after-revolution governments to meet them, such as our demands to prosecute Mubarak and his aides for their corruption, to make a timeline for the transitional period and to elect a new president and parliament. Such great achievements might not be reached without constant popular pressure.

During the Mursi presidency, people were afraid of the Islamization of the state, and there were unmistakable signs that Muslim Brotherhood was trying to control the political arena without offering any space for other political actors, thus many grass roots movements emerged, such as Tamarod, in order to incite people to take to the streets to renounce these practices. This kind of demonstrations reached its climax on the 30th of June 2013, with the support of the media above all. Currently, we don’t have this kind of demonstrations anymore, except few demonstrations led mainly by Muslim Brotherhood supporters.

Why did Mursi disappoint many people?

In addition to all the reasons mentioned above, I have to say that people were mainly disappointed by his policy and the government performance.  Furthermore, media played a significant role in criticizing his policies, decisions and plans.

Another reason was the overwhelming majority of the inexperienced Islamist politicians in the first parliament. They helped in distorting the Islamist reputation.

On the other hand, after the revolution people expected their living conditions would improve swiftly, and this could not happen immediately. As well, Mursi’s rhetoric played a significant role as people felt he belonged to the Muslim Brotherhood and served their interests.

In addition to all previous factors, one can't ignore the fact that the president’s rhetoric was so powerful to make Egyptians feel that he cared and served only the Muslim Brotherhood interests but not the country.

How did parties change after the government of Mubarak?

During the era of Mubarak we had a lot of political parties that did not have any real presence among ordinary people. We did not have any real political life at that time. After the revolution, the way was paved for many new political parties to emerge; however, after 30 years of political stagnation these new parties were lacking real leaders in whom people could place their trust. A huge gap existed between those so-called elites and the man on the street which ruined the momentous changes of the ordinary people who became more interested in politics.

Currently, I believe the problem is still not solved because politicians haven’t yet adopted efficient methods to reach out to people. They still sit in their ivory towers. Egypt possesses more political parties but people cannot find the appropriate representation among them. In short, we need time to build Cadres who can lead Egypt towards better future.

Do you think that the protests could change something in Egypt?

I believe that participating in the demonstrations has changed a lot in the Egyptian personality characteristics, even in those who did not take part in them, because people turned to be more interested in politics. Demonstrations helped in building self-confidence because people were engaged in changing the political decisions.

After the revolution, Egyptians have raised their political awareness, you could find them speaking about politics and engaging in deep discussions about politicians and governments’ decisions wherever you went. Furthermore, this awareness has appeared in queues of the electorates in front of polling stations.

How does a perfect Egypt look like for you? What would you change?

A perfect Egypt for me would be a democratic inclusive country in which all citizens, from all walks of life, enjoy living with dignity and abiding laws. On a personal level, the only way to achieve this goal is through the improvement of the educational system.  Egypt must give priority to education, so that new generations will be armed with knowledge in order to make a real change. If I could make a change, it would be establishing national organizations aiming at raising public awareness about citizenship, human rights and coexistence.