The Middle East at Crossroads

Panel discussion at the C·A·P


On July 30, the C·A·P hosted a panel discussion on The Middle East at Crossroads in cooperation with the Bundesverband Sicherheitspolitik an Hochschulen in München and MEIA Research and the AG Asien of the Geschwister-Scholl-Institute. 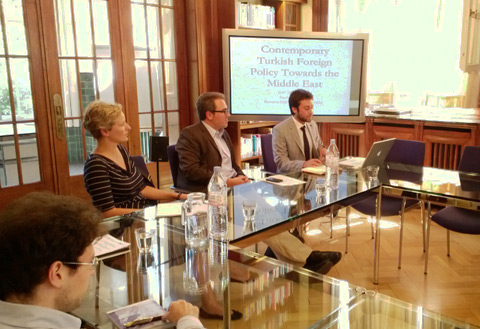 First, Egemen Bezci, a Research Fellow at the Social Sciences Institute of Sakariya University, discussed his views on the underlying aims of contemporary Turkish foreign policy at increasing the countrys sphere of influence. Furthermore, Mr. Bezci addressed the implications of the so-called Arab Spring on Turkish foreign policy, especially in the case of Egypts Muslim Brotherhood, the Civil War in Syria and Turkish-Kurdish rapprochement plans. Afterwards, Almut Möller, Head of Program at the German Council on Foreign Relations presented the role of the European Union in the Middle East in response. She emphasized the heterogeneous nature of the EU at its member states, rendering a monolithic foreign policy impossible  especially towards the MENA region. While highlighting the success of European Neighborhood Policy towards the Central and Eastern European states  most of whom eventually were integrated into the EU, Ms. Möller also pointed out the difficulties in using this strategy towards Turkey and the MENA region. Especially now, in a time of uncertainties  be it the Euro Crisis, the Arab Spring or Turkeys review of its position towards EU membership  the EU lacks its influence as a role model, rendering its foreign policy reactive rather than proactive. Following the panelists input, Michael Bauer, Head of the Middle East section at C·A·P, opened the floor for questions from the audience, moderating an insightful discussion on the EUs military power, on arming Syrian rebels and the impact of Turkish foreign policy on the domestic arena. A particular emphasis of the discussion was also on prospects and challenges for research and training programmes with Middle Eastern partners under the current circumstance. In cooperation with the Institute for Foreign Cultural Affairs (ifa) and the German Academic Exchange Service (DAAD) the C·A·P runs a joint programme with the Arab Institute for Human Rights, the American University in Cairo, Cairo University, the University of Carthage and with other partner institutions in the Middle East. 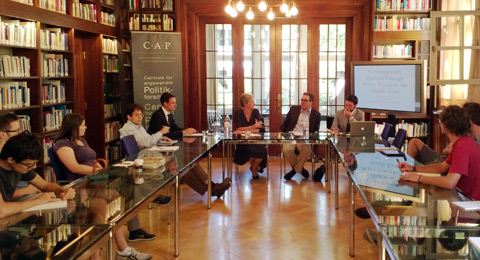