What are the internal and external consequences of EU enlargement? On October 11-12, some 30 European and Chinese researchers came together in Munich to discuss this question. The conference "The Impact of EU Enlargement on European Integration and the Global Political Economy" was organized in the framework of a collaborative research project of the same name, which the Center for Applied Policy Research in Munich (C·A·P) and the Centre for European Studies at Renmin University of China (CESRUC) jointly run since the beginning of 2006. The EU-China European Studies Centres Programme of the European Commission and the Fritz Thyssen Foundation generously supported the conference, which aimed at summarizing and discussing the main findings of two years research and developing further research perspectives. 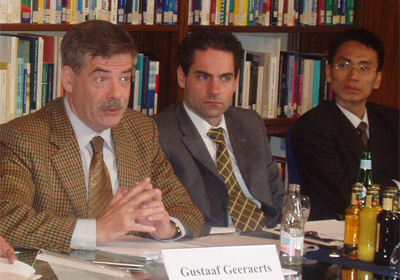 The first panel with Janis Emmanouilidis (Hellenic Foundation for European and Foreign Policy, Athens), Prof. Zhao Haifeng (Harbin Institute of Technology), Dr. Barbara Lippert (Institute for European Politics, Berlin), Kai-Olaf Lang (German Institute for International and Security Affairs, Berlin) and Prof. Liu Wenxiu (Renmin University Beijing) addressed the question "How to deepen an enlarged EU?". First, the old question of "deepening versus widening" was discussed and most experts agreed that these two processes are not necessarily in conflict with each other. After the EU enlargement and the failed ratification of the Constitutional Treaty, however, the speakers see a clear need for reform in order to unblock the European integration process. Some of the experts did not consider the EU having an "institutional crisis". They all agreed, however, that European decision-making was lacking efficiency. The reform treaty decided in June 2007 was regarded as a good step forward in this respect. The panellists stressed, however, that in light of the growing scepticism in some of the member states the ratification of the reform treaty could not be taken for granted. Central in the following discussion was the question of "drivers" of European integration. Are some of the member states more capable and willing than others to lead the integration process? Many researches doubted that the Franco-German "engine" could be as efficient in an enlarged EU as it was in earlier years. They agreed that "leadership" in this context would not be a question of a country's size but of political will and the ability to make compromises. 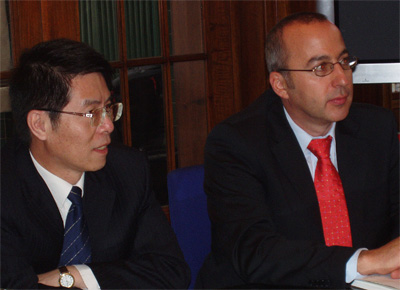 The second panel with Prof. Jaroslav Jak (University of Economics, Prague), Dr. Wolfgang Quaisser (Osteuropa-Institut Munich), Prof. Markus Taube (Institute for East Asian Studies, University Duisburg-Essen), Prof. Liu Xin (Renmin University of China, Beijing) and Matthias Kullas (University of Würzburg) was dealing with "The economic consequences of EU Enlargement". From an economic point of view, the extension of the European single market is in principal of benefit to all member states. Most speakers remained sceptical, however, concerning the competitive capacity of the new member states. As a trend for the future, they expect a concentration of European investment and economic activity within the European Union. The EU external trade would thus become less important vis-à-vis the growing internal trade. The impact of EU Enlargement on EU-China trade was a further matter of discussion.

The third and last panel with Simone Weske (C·A·P), Prof. Song Xinning (UNU-CRIS, Brugge), Dr. Franco Algieri (C·A·P), Prof. Gustaaf Geeraerts (Vrije Universiteit Brussel) and Prof. Zhang Xiaojin (Renmin University of China, Beijing) was dedicated to "The role of the EU and China in today's globalised world". The panellists discussed different notions, which aim to describe EU-China relations. The term of a "strategic partnership" was unanimously seen as an empty phrase. The speakers preferred to speak about a "competitive partnership". They agreed that the "honeymoon" in EU-China relations is over and that relations have become more pragmatic. On many issues, however, there is still a lack of continuous dialogue. Defining systematically common interests in energy security questions, transatlantic relations, WTO issues or the Middle East conflict would be a step forward to make EU-China relations more "strategic". Furthermore, the panellists discussed the question to what extent China's growing economic power goes hand in hand with a growing responsibility on the international scene. At present, according to most speakers, China's political priorities are very much focused on its internal development and the country is thus not yet fully assuming its role as a responsible power in a global context. 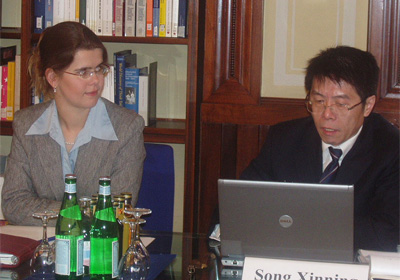 The conference in Munich concluded the two years research project, which was supported by the European Commission in the framework of the EU-China European Studies Centres Programme. The collaboration between C·A·P and CESRUC, however, will continue. Both centres were celebrating the 10th anniversary of collaboration in 2007 and are aiming at further common projects on the issues of EU-China relations and European integration.