Reinhard Eisel: Britain's China policy from 1949 to 2005: From an Idealistic Approach to Return to a Focus on the Economic Factor 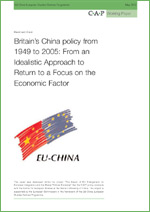 
The legal structure of the European Union (EU) is characterised by diversification in both the China policy of the member states as well as in the institutionalisation process between the Peoples Republic of China (PRC) and the single EU members. Indeed, with its China policy, the EU sets a common framework for the member states' national China policies. Nevertheless, the EU Member States have to continuously make the decision whether the EU targets are in line with the nation states' interests and whether co-operation or competition is preferred in foreign relations areas within the EU. Britain, being among the "big three" of the EU undoubtedly, plays a major role in the definition and application of the China policy of the EU.

This article will illustrate the current British China policy and derive their present "pillars" historically. Furthermore, the governmental and non-governmental main-players of this relationship will be identified. Britain is Chinas biggest European investor and among one of the countrys main trading partners. The relationship between both countries has been emotional and eventful and both the PRC and Britain are interested in intensifying bilateral relations. In comparing policy rhetoric with facts and figures, it will be illustrated that, when Britain's China policy began, it was highly economic and defence oriented and during the Cold War become increasingly ideological and idealistic. With the end of the East-West conflict, however, Whitehall began ever more to pursue economic-centred and pragmatic relations with China, following afterwards to some extent the China policy defined by France and Germany, Londons main European competitors on the Chinese market and political alliance.