Regional Differentiation of the New Member States of the European Union 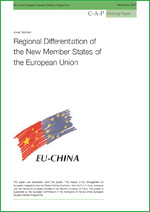 Ing. Josef Abrhám, Ph.D. is a member of the Department of World Economy in the Faculty of International Relations, University of Economics, Prague.