The Lisbon Strategy - Revision of the European Social Market Model? 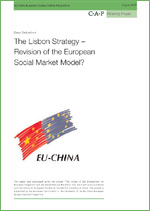 
The Lisbon Strategy depicts how the EU plans to facilitate economic growth and to draw level with the USA, especially in GDP growth and labour productivity. The objective of the Lisbon Strategy is to transform the EU into the most competitive and dynamic world economy based on knowledge as well as to achieve sustainable growth in the EU, creating a greater number of quality jobs and more social cohesion by 2010. The unsatisfactory evaluation of the fulfilment of the Lisbon strategys objectives led to its revision in 2004. This revision could raise the assumption that, for further economic growth in the European Union such previous priorities as social cohesion, high labour standards, a well-developed social system and social dialogue are somewhat superfluous. But regarding the evaluation of the fulfilment of the Lisbon objectives (World Economic Forum), in comparison with the USA, the Northern countries  Finland, Denmark, Sweden, countries with very high social standards and levels of worker protection, fared best.

A developed social system does not diminish the competitiveness of a country as long as the country can realize technological development and has a high-quality institutional framework for entrepreneurial activity. Cultivation of social capital is a key theme in this process. Rather than giving up the priority of sustainable development and social cohesion, the EU should try to simplify its functionary mechanism.

Prof. Ing. Dana Zadrailová, CSc. is professor in the Department of Commercial Enterprise and Commercial Communications at the Faculty of International Relations, University of Economics, Prague