Sarah Seeger: Bridging the gap between the EU and its citizens - the German EU Presidency, C·A·P Working Paper, August 2007. 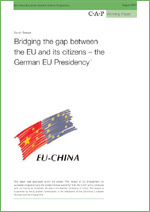 
Since the rejection of the European Constitutional Treaty in two of the EUs founding member states in spring 2005, much has been said about the gap between the European Union and its citizens and the EUs democratic deficit. One of the main points blamed for being responsible for the democratic deficit has been the lack of social legitimacy. Therefore, the German EU Presidency in the first half of 2007 made great efforts on communicating European values aiming at re-gaining public support for the European integration process.

As it will be laid down in this paper, the German government mainly focused on communicating universal and inclusive values. It will be argued that, additionally, an exclusive definition of the EUs character has to be found to establish a European sense of belonging. A new "master project" has to be identified, which can facilitate support and empathy among European citizens.

Sarah Seeger is research fellow at the Center for Applied Policy Research  (C·A·P)  at the Ludwig-Maximilians-University Munich.