The Role of France and Germany in EU-China Relations 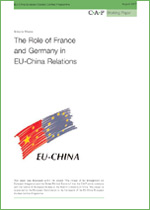 
The European China policy cannot be analysed as if the EU were a state with one and the same will: Each decision is the result of a complex search for compromise, which has become even more difficult after the 2004 and 2007 enlargement rounds, raising the number of member states to 27.

This paper focuses attention on two member states, which are especially important for the shaping of EU-China relations: France and Germany. It will be shown how their national China policies influence the overall EU-China policy.

Simone Weske is research fellow at the Center for Applied Policy Research (C·A·P) in Munich.