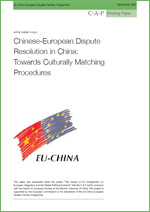 
The EU-enlargement to a group of 27 member states in 2007 has increased the EUs global political and economical significance and its potential to exert strategic weight in international diplomacy. This has an impact on negotiations in EU-China relations. The Unions negotiation position vis-à-vis the Chinese partner is stronger than ever. At the same time, the Chinese increasingly recognise the dimension of the European cultureas complex as it is. This new situation for both sides gives reason to a closer look on negotiation and dispute resolution between Europe and China.

Inherently, negotiations on economical and political issues in EU-China relations are complex enough. What makes things even more challenging is the precarious cross-cultural divergence on how to negotiate and resolve disputes: How to lead negotiations when the parties` procedural preferences significantly differ from each other? There is no self-evident mutual consent on premises, procedures and norms in negotiation and dispute resolution between Europe and China. However, negotiating without such a common basis clearly hems effectiveness. It is thus imperative to explore how the different procedural preferences can be handled. The aim of the paper is to initiate the transfer and systematization of successful experiences with procedural issues in Chinese-European negotiation.

Methodically, the paper proposes an innovative theoretical approach to the problem as it translates central terms of interest-based negotiation theory into the cross-cultural context. The paper first examines Chinese and European preferences in dispute resolution and how they are reflected in the different modes of Alternative Dispute Resolution (ADR). Then, it gives suggestions for cross-culturally matching dispute resolution procedures which are likely to be appreciated as effective and fair on both sides. The study is based on the examination of ancient chinese philosophy, current sources on ADR and personal interviews with negotiation professionals in Chinese-Western business (corporate lawyers, lawyers, and arbitrators/mediators) carried out in Beijing 2007.

Anne Isabel Kraus is research fellow at the Münchner Kompetenzzentrum Ethik (MKE) at the Ludwig-Maximilians-University Munich.