Regionalisation in the Czech and Slovak Republics

Comparing the Influence of the European Union. Position by Martin Brusis

This article was originally published in: 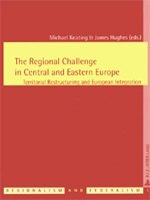 How has the European Union influenced the re-creation of regions and regional self-governments in the Czech and Slovak Republics? The paper focuses on this particular aspect of the enlargement and accession process because regional government will play an important role in the EUs cohesion policy after accession and regions in Western Europe have been affected by the process of European integration. The EU cohesion policy or, more specifically, the management of structural funds, envisages the participation of regional authorities, but it does not regulate their constitutional status in EU member states. In this respect, EU member states agree in considering the status of subnational government as part of their sovereignty, and this basic legal understanding applies to the accession countries as well. However, one has to take into account that EU institutions have a much more powerful position vis-à-vis accession countries than in their relations with member states. In addition, regional government or, more precisely, regional administration has been subject to fundamental change in the accession countries, and its constitutional status is less consolidated than in member states.

It is asked whether and how these different conditions cause a substantial, formative impact of the EU on the process, politics and institutional outcomes of the reform of regional-level administration in the Czech Republic and Slovakia. In both republics, regional bodies of state administration were dissolved in Czechoslovak times. Thus, reformers in both countries faced similar tasks of re-building the regional level in the context of the reform of public administration, and. As a part of this regionalisation, the Czech Republic and Slovakia established the legal foundations of regional self-governments in 2000 and 2001, respectively. Both countries have to meet largely similar requirements of accession and implementing the acquis. In contrast with the Czech Republic, Slovakia was strongly criticised by the EU due to the undemocratic style of Vladimír Meciars government (1994-1998) and, in 1997, it was classified by the EU as the only accession country not fulfilling the accession criterion of democratic stability. Both countries differ significantly in the constellations of political actors that have emerged since the democratic transition.

The paper finds a strong EU impact as far as (1) mandatory legislation and (2) the general orientation, receptiveness towards the EU/Europe in public discourse is concerned. While the EU has effected an institutional harmonisation where mandatory rules exist, the Union has hitherto not induced changes that made Czech and Slovak regional administration more similar than before. EU impact has been modest with respect to the sequencing of legislation and the changes of behaviour of political actors in crucial moments of the reforms. Despite its considerable impact on the public discourse, the EU has not substantially altered the behaviour of political actors who have retained their main objectives and have taken into account the EU only as an additional component of their wider assessment of the political constellation. Major aims of the reforms of public administration - decentralisation, regional self-government and a new territorial-administrative division  were not suggested or altered by the EU.

Regionalisation in the Czech and Slovak Republics