"A relationship in crisis" 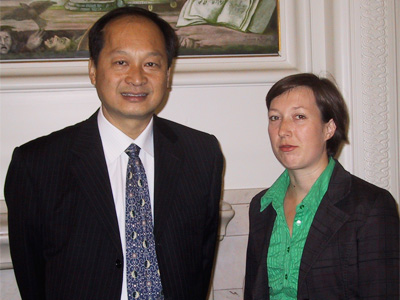 
On 31 August 2007, Chinese scholars from the Institute of World Development and the Euro-Asian Social Development Research Institute (both based in Beijing) visited the C·A·P to discuss the EU-Russia relationship and its further evolution among European researchers. The main interest was in the basis of Euro-Russia relations and what kind of change the EU enlargement has brought to the EU's Russia policy.

In an introductory statement, C·A·P research fellow Dr. Iris Kempe outlined the current situation as being a relationship in crisis and enumerated this aspect with regard to three core issues: the difficulties to agree on a new framework of cooperation succeeding the Partnership and Cooperation Agreement, raising problems related to the field of energy and different values, and interests in the so-called overlapping integration zone.

In the subsequent debate, a broader perspective was opened by including U.S. policy and its strategic gap towards Russia. Russia plays a negligible role in current U.S. foreign policy. Further aspects that came up were the future status of Kosovo as well as the political impact and main interest of the Shanghai Cooperation Organisation comprising China, Russia, and the Central Asian states.