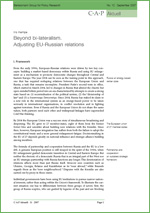 
From the early 1990s, European-Russian relations were driven by two key concepts: building a market-based democracy within Russia and using EU enlargement as a mechanism to promote democratic changes throughout Central and Eastern Europe. The year 2004 can be seen as the turning point in this approach, one that has required reshaping relations between the European Union and Russia, a task that remains incomplete. President Putins second term in office, which started in March 2004, led to changes in Russia that altered the chaotic but open-minded Yeltsin period into an era characterized by attempts to create a strong state based on (1) recentralisation of the political system, (2) the "dictatorship of law" and (3) a Souverenaya Democratiya. Since 2004, Russia has staked its claim to a new role in the international system as an energy-based power to be taken seriously in international organisations, in conflict resolution and in fighting against terrorism. Even if Russia and the European Union do not share the same values, both partners need each other and widespread linkages have superseded Cold War thinking.

By 2004 the European Union was a success story of simultaneous broadening and deepening. The EU grew to 27 member-states, eight of them from the former Soviet bloc and sensitive about building new relations with the Kremlin. Since then, however, European integration has suffers from both the failure to adopt the constitutional treaty and a more general enlargement fatigue. Decision-making in the EU of 27 depends greatly on national influence and strategic alliance building among members.

The formula of partnership and cooperation between Russia and the EU is a low ebb. A genuine European position is still steeped in the spirit of the 1990s, when EU enlargement guided democratic transition in Central and Eastern Europe. But neither the rhetoric of a democratic Russia that is an integral part of the West nor an EU strategic partnership with Russia functions any longer. This deterioration of relations affects more than just Russia itself. Moscow sees countries such as Ukraine, Georgia, Belarus and Kazakhstan as its near abroad, while Brussels regards them as the new neighbourhood. Disputes with the Kremlin are also carried out by proxy in these states.

Individual governments have been using EU institutions to pursue narrow national interests, rather than acting within the Unions framework. To illustrate the current situation one has to differentiate between three groups of actors: first, the group of Russia sceptics, who are guided by legacies of the past and are blocking cooperation with Russia. The Polish veto of the mandate for a new Partnership and Cooperation Agreement, the problem of the Druzhba pipeline in Lithuania and the conflict surrounding Tallinns war memorial are all examples. Second are countries, which do not care much about Moscow, such as Portugal and Greece. Third are the proponents of fruitful relations with Russia, such as Finland and Germany.