Douglas Bandow, Fellow at the American Conservative Defense Alliance, at the C·A·P 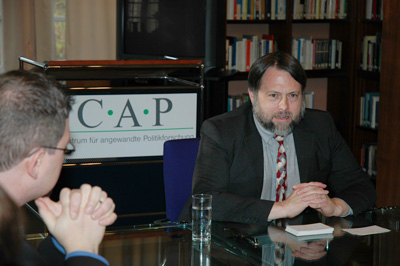 Douglas Bandow, Robert A. Taft Fellow at the American Conservative Defense Alliance, Vice President of Policy at Citizen Outreach and former Special Assistant to the Reagan administration, visited the Center for Applied Policy Research (C·A·P) in Munich on November 20, 2008. He gave a presentation on the options for a new U.S. foreign policy under a new U.S. President. The major problem for Barack Obama concerning the implementation of change will be the negative legacy of the 8 years of the Bush administration. Because domestic policy dominated the election campaign and also decided the public vote for him, the next President will have to focus on economic issues first. Therefore, allies and international partners should not expect too many ambitious U.S. initiatives in terms of foreign policy within the next 12 months. However, the big opportunity for the Europeans will be the new tone Barack Obama will introduce to U.S. foreign policy. He will not follow an absolute approach concerning negotiations with Hamas or the regime in Teheran, but rather prefer a more pragmatic line. This is also the consequence of the legacy he has to face back home. With substantial deficits, the impact of the financial crisis and recession of U.S economy at hand, it will be difficult for him to find satisfying solutions for everybody. Pragmatism will be the best choice at hand. That is also the reason why he will be relying heavily on experienced people form previous administrations in his cabinet.

For Europe, this means that they will be asked to cooperate as credible and committed partners for finding solutions to the problems for the most urgent tasks in terms of international politics, such as the Middle East peace process, the nuclear dispute with Iran, proliferation issues, and development in Central Africa.

The working meeting took place at the Center for Applied Policy Research (C·A·P) in Munich. It was organized in cooperation with the Consulate General of the United States in Munich, continuing the fruitful cooperation between both houses.