Transatlantic relations and the new US-Administration

On February 17th, Stephen Szabo, Director of the Washington-based Transatlantic Academy, visited the Center for Applied Policy Research to discuss the topic of transatlantic relations and the new US-Administration. High expectations oppose different approaches to international security on both sides of the Atlantic. Therefore Mr. Szabo raised the question whether the last years of cooling down the transatlantic relationship were an exception or if  9/11 was part of a bigger break. 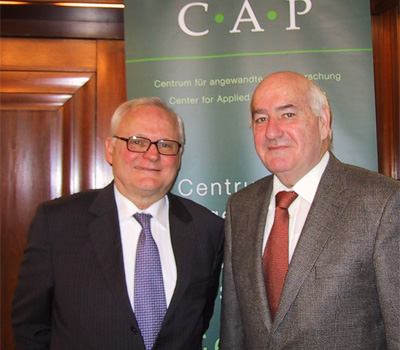 What seems clear is that key issues of the new US-President, as well as the new Administration, shifted to Central Asia. Being involved in the Afghanistan and Iraq clashes, the United States has no choice but to think strategically. Hence they expect their "partners" in Europe to adopt this strategic way of dealing with the "hot button issues". Consequently, the transatlantic relationship has shifted to a global relationship where we still share the same values in terms of sharing the same idea of the global order. Problems are expected when it comes to the coherency of the European member states in dealing with the American commitments in the world. Still, the Europeans do not have a complete notion of what a Pan-European security concept should be exactly.

For Szabo, German-American relations came into focus with the rise of Russia as a global player. For the US, Germany is the key to reaching an understanding with Russia. If Russia is willing to deal, the German-US relations would become a new foundation. It is highly recommended to reinvigorate the NATO-Russia Council in order to lay down rules for both sides, Russia and the West.

The subsequent discussion with Professor Werner Weidenfeld and distinguished C·A·P experts and fellows dealt with further topics concerning the composition of President Obama's cabinet, and especially the role of Hillary Clinton. According to Szabo, Obama is still structuring his foreign policy expertise. This includes Hillary Clinton having to prove that she has a concept for foreign policy issues and is able to position herself in a diplomatic and assertive way. Moreover, from a present-day perspective President Obama's real commitment lies with issues like energy policy and climate change. The next few months will show where the real hot button issues lie and how the new US-Administration will cope with them.