On February 21st, 2007, Donald R. Shemanski, Counsellor for Global Affairs at the U.S embassy in Berlin, visited the Center for Applied Policy Research. After giving a comprehensive overview of his work in crosscutting US-policy topics such as trans-national terrorism, non-proliferation of weapons of mass destruction, climate protection and trafficking in persons, Mr. Shemanski discussed the transatlantic relationship with regard to the most important current issues. 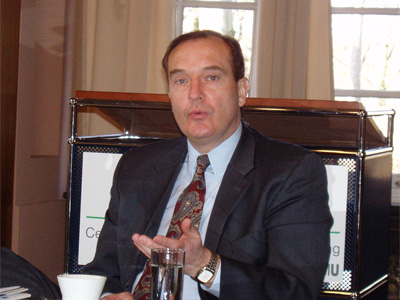 He outlined that the United States placed great importance on improving the cooperation with other countries in order to jointly tackle global challenges. Europe and other countries in the world were encouraged to act against the threat of global terrorism. Mr. Shemanski emphasized on the threat of perpetual terrorism and underlined the importance of an alliance against weapons of mass destruction and the future terrorism potential of Al Qaida. The vulnerability toward international terrorism ties Europe and the United States together. Having taken an only minor interest in the issue of environmental protection for quite some time, the United States and the President George W. Bush recently showed great interest in undertaking further steps in the face of this challenge. Despite the fact that the United States did not ratify the Kyoto agreement, climate protection has recently gained a new status on the American policy agenda. New laws with concrete goals were enacted in order to help reduce CO2-emission rates and improve energy security. For instance, according to the "Twenty-in-ten"-program of the U.S. government, the average gas consumption is expected to be reduced by 20 per cent in 10 years.

The visit of U.S. diplomat Shemanski stressed the importance of the transatlantic relationship to tackle the global affairs in the 21st century.

Obama's vision of nuclear non-proliferation
The cases of North Korea and Iran highlight the weaknesses of the current non-proliferation regime
29.06.2009 · By Mark Hirschboeck
AKTUELLE C·A·P-NEWS