Dispute between Russia and Ukraine settled? Strategies for the EU to get out of the gas trap

Sebastian Schäffer, Dominik Tolksdorf:
Dispute between Russia and Ukraine settled? Strategies for the EU to get out of the gas trap.
C·A·Perspectives · 1 · 2009 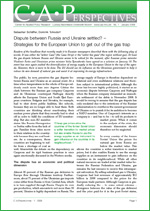 Our first issue in 2009: Readers of the headlines that recently made it to Russian newspapers described them with the following play of words: It was either the "sektor Gaza" (the Gaza Strip) or the "sektor bez gaza" (the region without gas). At least the gas dispute between Russia and Ukraine seems to be solved for the moment, after Russian prime minister Vladimir Putin and Ukrainian prime minister Yulia Tymoshenko have agreed on a solution on January 18. The event has once again pushed the diversification of energy supply in the European Union to the top of the agenda. However, there is more to be done. The EU should use its influence on the Ukrainian government to help it reduce its own demand of natural gas and assist it at improving its energy infrastructure.