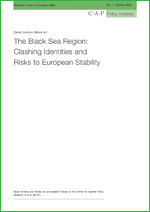 
The crisis over South Ossetia between Georgia and Russia that took place in August 2008 highlights the volatility of the Black Sea region as a new flashpoint in the common neighbourhood between Russia and the European Union (EU). What has made the conflict in Georgia so crucial to the EU is the fact that this is not to be seen as an isolated occurrence. The incidence has repercussions throughout a region that is marked by a plethora of challenges to political stability and democratic consolidation - factors that directly affect European security and welfare.