The EU member states and the Eastern Neighbourhood - From composite to consistent EU foreign policy? 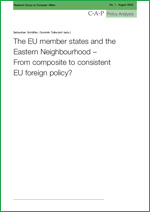 
Through several events the Eastern neighbourhood of the European Union became a focus of the EU foreign policy during the last couple of months. Since the war in Georgia in August 2008, there has been increased international interest in the south Caucasus region. The request for NATO membership by Kiev and Tbilisi as well as the gas crisis between Russia and Ukraine in January 2009 have led to controversial debates in Europe, the USA and elsewhere. Observing closely the role of the Russian Federation towards its neighbouring countries and the tensions and/or frozen conflicts in Abkhazia, South Ossetia, Transnistria, and Nagorno-Karabakh, the EU sees itself in a position to become more actively involved in the region. Besides stability aspects, the EU has various interests in the Black Sea region, among them the goal to secure and establish old and new energy transport routes.

The major question, however, remains how the EU can become a more unified actor that is able to manage the future challenges in the region. The current EU policy towards the Eastern neighbourhood consists of various initiatives equipped with different instruments. Furthermore, the views among the EU member states of how to deal best with Russia and other states in the Black Sea region vary widely. In the future, the European Neighbourhood Policy (including complementary instruments like the Eastern Partnership) and the member states policies towards the Russian Federation and the Black Sea region therefore have to be coordinated more effectively. Some questions arise in this respect: in which ways do the EU member states have to adjust their bilateral relations with the countries of the Eastern neighbourhood in order to achieve this goal? How can such a strategy be harmonized with the rather technical instruments of the European Commission? How can the composite EU foreign policy be transformed into a more unified and consistent policy towards the Eastern neighbourhood?

These questions were discussed during a workshop held at the Center for Applied Policy Research (C·A·P) in Munich on 25 and 26 June 2009. The C·A·P Policy Analysis consists of several papers that focus on specific topics related to the central questions of the workshop.

In his paper on the role of the Euro-Atlantic community in the south Caucasus, Nasimi Aghayev, editor-in-chief of the Caucasian Review of International Affairs, analyses how to effectively counter the risk of Russia reasserting control in the region. He claims that in the absence of stronger Euro-Atlantic engagement and commitments, the states of the south Caucasus will become disillusioned with the Euro-Atlantic community and consider Russian interests and positions more frequently and earnestly in their policies and interactions with the West. This would inevitably lead to  increased dependence on Russia (both economically and in terms of security) and gradual alienation from the West, thus substantially endangering Euro-Atlantic interests (primarily those of energy and security) in the region, resulting in the Finlandization  i.e. forcing the regions states to seriously consider the Russian factor in all their interactions with the West  of the south Caucasus.

Ekrem Eddy Güzeldere is an analyst at the Istanbul office of the European Stability Initiative (ESI) and examines in his paper the shift of the Turkish foreign policy towards its neighbours, from the former perception of being surrounded by enemies to a zero problem policy. The author demonstrates how the Turkish government aims to become a mediator in the conflicts of the south Caucasus, which includes the promotion of the Caucasus Stability and Cooperation Platform (CSCP) and even the improvement of the Turkish relations to Armenia. However, Ekrem Eddy Güzeldere concludes that immediate success appears unlikely because the interests of all participants diverge significantly. Furthermore, the lack of a common perspective like EU or NATO membership makes success more difficult to achieve.

Dr. Stefan Meister, research fellow at the Centre Russia/Eurasia of the German Council on Foreign Relations (DGAP), examines in his paper the lessons learned from the Ukrainian-Russian gas conflict of January 2009 for the EU-Russia relations. Although both partners have a mutual dependence in the energy sector, energy policy on both sides is still highly ideologized. The EU as well as Russia both recognise the importance of energy security but only moderate progress towards this goal has been achieved in recent negotiations. The author therefore concludes that the time is ripe for a common energy policy of the EU that can be turned into a pillar of the strategic relations between both partners.

Kateryna Malyhina, freelancer at the editorial staff of the Ukraine-Analysen of the research centre on Eastern Europe of the University of Bremen, discusses in her contribution alternative concepts for EU membership and the perception of European foreign policy, using Ukraine as an example. She presents the strategic goals of cooperation from the EUs perspective, as implemented by the Association Agreement and the Eastern Partnership. The main problem within this framework becomes obvious if Belarus and the Ukraine are compared according to their level of integration with the EU. While Belarus is only at the beginning of the process to develop deeper relations with the EU, Ukraine is far more advanced in several policy areas such as economic cooperation and visa policies. It therefore perceives the Eastern partnership only as an additional instrument of cooperation and not as a viable alternative for EU membership. The author concludes that if no further incentives are presented from the EU side, the aspiration of membership will no longer be relevant in the Ukrainian foreign policy.

The final conclusion of the C·A·P Policy Analysis summarizes the outcomes of the workshop and provides answers to the questions mentioned above. Furthermore, the final conclusion includes policy recommendations for a consistent EU foreign policy towards the Eastern Neighbourhood, which were discussed during the workshop.

Southern and Eastern Neighborhood
Conference by the Academy of Political Education Tutzing and the Institute for the Danube Region and Central Europe
09.10.2017 · C·A·P