Plan B - B for Balkans

The Policy Paper was presented during the panel discussion "Revisiting the Europeanisation of the Balkans". 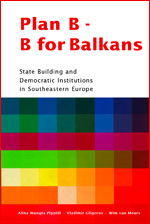 
With the accession of Romania and Bulgaria in the European Union on 1 January 2007, the epochal process of EU Eastern enlargement has officially come to an end. Despite the fact that the Stabilisation and Association Process for the Western Balkans' integration into the EU shares many strategic approaches and instruments with Eastern enlargement, the European Commission has made it abundantly clear that Southeastern enlargement is a new process altogether. Next to all projections of the Balkans' integration into Europe foresee a much more protracted and arduous process, despite the enhanced transformative power, reform assistance and political guidance provided by Brussels.

From the perspective of the Balkans, Romania's and Bulgaria's EU membership and Croatia's status of negotiating candidate gave the process of Southeastern enlargement a head start. Since 1999, the perspective of EU integration has become the hegemonic discourse for reform analysis, policy making and strategy debates concerning the Balkans. Membership of the European Union and other Euro-Atlantic organisations is evidently the linchpin for a sustainable future for the region and its inhabitants. Many observers point to legacies of the past and the negative consequences of the wars and atrocities of the 1990s to warn against an overly optimistic view of the integration process. They thus highlight the qualitative differences in reform achievements between East-Central and Southeastern Europe prior to the start of the EU integration process. Others question the EU's qualities as a development agency and a conflict manager, drawing attention to Brussels ambiguous record in dealing with unwilling reformers and obstructed transitions.

Last, but not least, the crisis of the European Constitutional Treaty has reintroduced an almost forgotten variable into the equation of enlargement, the absorption capacity of the European Union. The twenty-seven member states' agreement on a reform treaty in October 2007 to replace the draft constitution, which was jettisoned after the French and Dutch referendums in 2005, is expected to end the phase of the European paralysis. The reform treaty should boost the deepening and widening of European integration and enhance EU capabilities. Nevertheless, Euroscepticism, enlargement fatigue, EU absorption capacity and a stronger defence of national interests by the twenty-seven national governments and their constituencies are not likely to be dissipated any time soon. Irrespective of actual reform progress in the region and any new EU dynamism, the integration of the Western Balkans into the European Union in the next decade will be much more of an uphill battle than East-Central Europe's "return to Europe" ever was. The prospect of individual enlargement referendums in member states such as France, the ever-expanding acquis communautaire and issues such as the Cyprus question or the naming of Macedonia need to be taken into account.

In sum, the matter-of-fact view that plan A (A for accession) for the Western Balkans will not become a political reality for at least another decade is commonly accepted. Few political decision-makers and analysts, however, would question the conclusion that the perspective of EU membership is the (only) light at the end of the tunnel for the Western Balkans. Consequently, time spent on a plan B (B for Balkans) is time well spent. The roadmap toward EU integration has been well defined and plan B is not an alternative in terms of objective or orientation. Yet, making the most of the endogenous potential of the region and thinking out-of-the-box of the standardised strategies and instruments of enlargement is a major challenge for all parties involved. Plan B is to facilitate plan A by actively capitalising on positive trends in Southeastern Europe and diversifying the EU's enlargement-driven strategic repertoire rather than by relying on the determinism of European integration.

The analysis of the current situation and the recommendations draw upon the outcomes of a sweeping comparison between post-imperial state building in Southeastern Europe in the interwar period and post-communist statebuilding at the turn of the twenty-first century. The Captive States project team, sponsored by the Volkswagen Foundation, analyses the establishment of formal and informal political institutions in the newly independent states of Southeastern Europe in the interwar period. The multi-country comparison of institutions, ranging from the judiciary and the monarchy to political movements and taxation, tends to qualify generic judgements on the Balkans, its institutional choices and its capabilities for reform and development. The comparison also draws attention to external constraints, time frames and institutional role models. By analogy, a more differentiated analysis of serious deficits and positive trends in the region today calls for adequate responses by the EU, beyond the current repertoire and the ongoing process of enlargement.