The golden Opportunity - Is the enlarged Europe ready for the Transatlantic Free Trade Area? 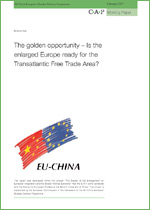 
The world economy grows together. When Japan and the East Asian Tigers Taiwan, Hong Kong, Singapore and South Korea entered into the global economy exchange of goods few years ago, the whole world waited for the consequences with bated breath. Since then, new economies like China and India forge ahead in the world economy. The integration of these two countries in the world market will be an enormous challenge for Europe and the United States.