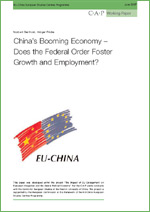 
China's economic growth is astonishing and leads to expectations that China might become the economic giant of the future. Possibly, one reason behind the Chinese boom might be relevant for Germany as well. The federal order of a nation state may account, at least to a certain extent, for its economic growth. While the importance of economies of scale and external effects are often stated and mentioned as justifying reason for centralisation and large jurisdictions, the advantages of decentralisation and jurisdictional competition are hardly recognised. It is the main objective of this paper to assess the link between federalism and economic growth. In doing so, we will elaborate on the main growth effects of federal orders shaped in a particular manner, discuss the theoretical approach by explaining the growth impact of a market-preserving federalism in detail and look at the practise of market-preserving federalism in several states, for example in China and Germany. Subsequently, we present empirical evidence showing the correlation between federalism and economic growth, again concentrating on China and Germany.

Prof. Dr. Norbert Berthold holds a professorship for political economics at the Faculty of Economics, Julius-Maximilians-University Wuerzburg. Holger Fricke is assistant lecturer at the same faculty.