Certainty in Ukraine's Uncertainty - The impact of the 2007 parliamentary elections

* In cooperation with Daniel Grotzky and Olaf Hillenbrand. Dr. Iris Kempe is senior research fellow at the Center for Applied Policy Research (C·A·P). This paper was written for the transatlantic conference The Euro-Atlantic Community and its Changing Eastern Neighbourhood: A New Policy in the Making? taking place in Kyiv, 26-28 October 2007. 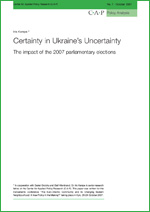 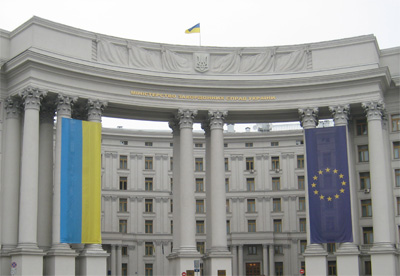 Ministry for Foreign Affairs of Ukraine

Ukraine's parliamentary elections on 30 September 2007 were supposed to deliver clarity. Either the Party of Regions would complete the comeback it began in the March 2006 electionssignaling closer cooperation with Russia and giving Ukraine's internal political development a particular direction, or the Orange parties led by Yulia Tymoshenko and Viktor Yushenko would gain a stable majoritymaking integration into Euro-Atlantic structures a national priority. Neither happened. The closely balanced parliament yielded a government of the Orange parties with a razor-thin majority, far from what would be necessary to renovate the constitution, and slender enough to raise doubts about the government's ability to rule for a full term. Ukraine, it seems, is certain to face more uncertainty.

Ukraine is the only country with the potential to re-order both the European Union and the "post-Soviet Space." A country transformed into a democracy and market economy would mean the EU could welcome a new member the size of France. The shape of new strategic preconditions would also increase pressure on Russia to reform its attitude towards its "near abroad" and to move in the direction of democratic integration. As far as the West is concerned, Ukraine remains the most important stone in the mosaic of a new Eastern Policy that still requires further development before it can be implemented.