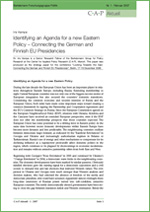 
During the last decade the European Union has been an important player in relations throughout Eastern Europe, including Russia. Extending membership to eight Central European countries was not only one of the biggest success stories of European integration but also secured the countries domestic transitions.


Considering the common economic and security interests of Russia and the European Union, both sides have made some important steps toward creating a common framework by signing the Partnership and Cooperation Agreement and the EUs Common Strategy on Russia. Since the European Commission agreed on the European Neighbourhood Policy (ENP), relations with Ukraine, Moldova and the Caucasus have received an extended European perspective, even if the ENP does not offer the membership prospects that those countries expected. The European Union has some potential to be a driving force in Eastern policy. At the same time however recent domestic developments within Eastern Europe have become more dynamic and less predictable. The neighbouring countries oscillate between democratic leaps forward, as indicated by the Rainbow Revolutions in Georgia and Ukraine and increasingly authoritarian regimes in Belarus or Turkmenistan. Russias use of energy and other mechanisms to compensate for its declining influence as a superpower profoundly affect domestic politics in the region, which continues to be plagued by shortcomings in economic modernization and remains without attractive partnership offers from both East and West.