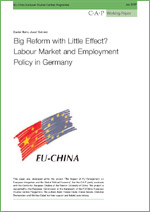 
German politics has been busy with the problem of continuous mass unemployment in recent years. Especially with the change of the government in 1998 some reforms have been established. Significant for the new drive were the results of the so called "Hartz-commission". Just before the Bundestag elections in autumn 2002, the commission presented their results whereon the Federal Government promised a speedy implementation. With the law packages Hartz I to IV this has also been realised, but with hardly any success in the beginning: the unemployment rate did not considerably decrease, the costs "ran out of the rudder", more and more implementation deficits appeared. What happened? How can the dialectics of the big plans on the paper and the small results in practice, i.e. "the successful failure" (Seibel 1991) be explained?