The security dimension of the transatlantic relations after EU-enlargement 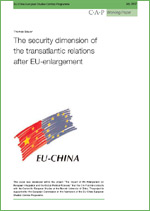 
The global political landscape is currently facing an era of reshaping international relations. New powers are emerging in Asia, Russia is trying to regain its former role as an important global actor, and old established powers and alliances are affected by political debates concerning the right way of responding to the ever fasting changing strategic environment. The transatlantic relations and NATO as the key security alliance between the United States and Europe are both trying to deal with the consequences of this reshaping process. At the same time the relationship between the two sides of the Atlantic is undergoing a substantial change as well. Compared to the times of the cold war era, when one major focus of international relations lay on the confrontation of NATO and Warsaw Pact forces in the heart of Europe, the current development is characterized by a whole network of interdependent centres of gravity. This paper takes a closer look at the security dimension of the transatlantic relations in order to show that it is not enlargement alone that makes the current security co-operation between Europe and the United States so difficult. It rather seems to be a combination of a changing strategic environment, increasing stability within Europe and the consequences for American awareness of the European interests, and old security concerns of the Central and East European states that have led to different views on the world.