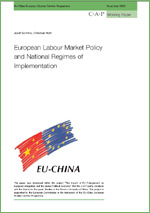 
Since more than ten years, nearly all European countries are facing the challenge of unemployment. However, the degree of the problem, its specific causes, and the strategies for fighting unemployment differ significantly. Schmid and Roth examine this multi-level phenomenon and the associated many-sided relationship between the EU and several states, because employment and labour market policy became important scopes of the Political Science in national and today supranational respect.

They analyse the problematic factors of the complex policy formulation and implementation structures and inspect the different instruments, the mechanisms to learn from each other and the innovative forms of regulation, whereas it is difficult to formulate a homogeneous, supranational, European policy.

The research identifies a number of characteristics and trends in the EU's labour market and employment policy, furthermore several components of the regimes of implementation in the states. The authors recommend no clear "blueprint", but the effort to learn from the variety of national patterns of communication, feed-back mechanisms and benchmarking procedures like "best practices" which are pointed out in the article.