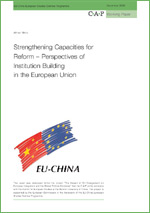 
From an outside perspective, observers of European integration might well ask why the European Union in general pays that much attention on its institutions and procedures of policy-making, and why, after more than half a century of European integration, it still devotes significant resources on shaping its political system. Since the first fundamental institutional reform with the European Single Act in 1986, the member states have undertaken not less than four substantial reforms of EU primary law that were laid down in the Treaties of Maastricht (1992), Amsterdam (1997), and Nice (2001), and finally the Constitutional Treaty (2004). How can this extraordinary investment in institution building be explained, and why is it  and will probably remain  an ongoing process?

The reasons can be traced back to the beginning of European integration in the 1950s. Institutions and decision-making procedures in the European Union have from the very beginning of integration proved very effective as a framework for shaping policies in an organisation that subsequently expanded its size and tasks. Especially the establishment of supranational institutions that can initiate and adopt binding legislation for the member states explains to a large extent the European success story. Hardly would the current level of integration exist if there had not been institutionalized procedures of decision-making on a supranational level. Until today the concept of supranationality remains unique in the landscape of international organizations all over the world.

Why institution building is still going on, even after half a century of integration, is first of all due to the fact that the founding fathers in the 1950s did not develop a master plan to set up a more or less complete political system within the first years of integration. Neither was there a clear consensus on how such an institutional backbone should look like in detail nor did the founding members agree on where exactly integration should take them: Toward an economic or even a political Union? Toward a Federal Europe or a Europe of Nations? Toward an intergovernmental or a supranational union? Starting with coal and steel, important industries in the 1950s not only for the economy but also for the ability to conducts wars, which were put under the responsibility of a High Authority (later transformed into the "European Commission"), the member states adopted a pragmatic approach to integration. In the following years the organisation gradually developed its policies and adapted its institutions and procedures of policy-making. This has led over the years to a completely new kind of political system that some critics blame for being overly complex, complicated, and hardly effective. But there is a systemic rationalism in this institutional jungle: Only the open character of the process and the balancing of different approaches to European integration made it possible to forge compromises and to keep the integration process going.

The question of finality has in fact often been discussed but has always been left open. And for good reasons: As the European Union is constantly changing its face due to continuous enlargement and due to the extension of competences, its political system must remain flexible in order to accommodate these changes. For that reason institutional dynamism is one of the key characteristics of the European Union, and it is probably also the most important resource for its future success.