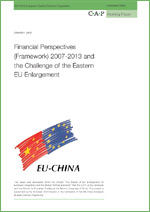 
The new Financial Framework (FF) indicates the financial means that are needed to address future internal and external challenges in an enlarged Union of 27 Member States.

The agreed Financial Framework groups EU policies and activities into broad categories of expenditure (headings), lays down the maximum amount in Euros for each heading for each year of the period 2007-2013. In the EU annual budgets those maximum ceilings have to be respected. Priorities for the new FF are in some ways different from the old Agenda 2000 (1999-2006): they aim at making the next EU enlargement (Bulgaria, Romania) a success. The priorities are to increase the Unions competitiveness substantially (Lisbon Process updated), to boost the European economy and to create more and better jobs. Furthermore, they aim to realise the concept of a European Union citizenship by expanding the area of freedom, justice and security, while last but not least strengthening the role of EU in the world. After difficult negotiations and the efforts of the British and Austrian Presidencies, in the Financial Framework Deal it was decided on a total of  864.4 billion, with a substantial slice earmarked for the new Member States after 2004; they are all net beneficiaries from the EU budget. However, in our opinion, the main focus of the headings of the Financial Perspective 2007-2013 (Agriculture, Cohesion) only partly reflects the real internal and external challenges facing the enlarged European Union in the next few years.