Regional Integration of the New Member States and Eastern Enlargement 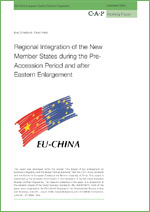 
Regional cooperation in the CEE region started to form immediately after the extensive changes in the region after 1989 and was strongly influenced by the process of Eastern Enlargement of the EU. This influence is especially significant because of the pressure of the EU itself on the formation of regional integration in Central and Eastern Europe during the accession process. As a result of this pressure, a whole range of regional cooperation schemes have been formed in the region. Most of them have survived their countries accession to the EU (e.g. Visegrad Group, Central European Initiative, Council of Baltic Sea States and others); however, for some the EU accession was rather critical (e.g. CEFTA).

Moreover, regionalism in the CEE region became an integral part of the Transformation Strategy of the Central and Eastern European countries. In terms of time of its creation, motives and goals, it fits into the epoch of New Regionalism. This is characterised by the exercise of progressive elements in regional cooperation, which are perceived as a way to maintain competitiveness in a globalising environment. From this point of view, the Eastern Enlargement of the EU itself is the result of the New Regionalism in Europe. On the basis of New Regionalism, selected CEE countries have become a part of the deepest regional integration in the world, and at the same time the players of the regionalism, both with and without global impact, in comparison with the bigger economic and political dimension than ever before.

The aim of this paper is to analyse the development of regional integration in Central and Eastern Europe during the enlargement process, and especially when thereafter it became purely or partly sub-regional to the main European integration scheme. On the basis of theory and practical findings about New Regionalism, this paper seeks to identify the progressive elements of the New Regionalism in the approaches and types of regional integration in CEE countries. The presence thereof can create a foundation for the CEE countries solid and prospective position under the architecture of the European integration process. The process itself is, in the times of globalisation, exposed to strong competitive pressures. And, so far European regionalism has not responded to those pressures in a sufficient way and is therefore exposed to the risk of a loss of competitiveness on a global scale.