From a European Neighborhood Policy toward a New Ostpolitik 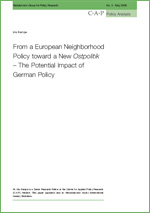 
The rainbow revolutions in Georgia and Ukraine drew inspiration from, and were oriented toward,Western values and norms. One of the most important objectives driving the new wave of post-Soviet transition has been the desire to join Euro-Atlantic structures. The goal of becoming an EU member is no longer limited to foreign policy declarations but forms a key component of the domestic reform agendas of these states. The unexpected dynamism of democratization and reform emerging from Eastern Europe has put pressure on Western policymakers to develop solutions that go beyond the agenda of an EU enlargement limited to 27 or 28 member states, partnership and cooperation with Russia, and a Neighborhood Policy driven by "everything but institutions" (Romano Prodi). The French and Dutch rejections of the European Constitution appear to signal that the "deepening"and "widening"of the EU have reached their limits for the time being. The European Neighborhood Policy is an important step forward, but it is not sufficient to guide democratic developments in countries that desire a concrete prospect for EU membership, including Ukraine, Georgia, and in the future even Belarus.

Ukraine's Orange Revolution once again demonstrated Putin's failure to influence the post-Soviet integration space through personal networks, direct pressure, and economic dependency. At the same time, Russia remains an important actor in Europe as a whole. For the first time, Russia and the EU face the common challenge of shaping overlapping integration spaces between Russia's old neighborhood or "near abroad" and the EU's new neighborhood. Eastern Europe's "return to Europe" has been driven by individual Eastern European states themselves, together with some of the new EU member states, such as Poland, Lithuania and Slovakia. But all of these efforts will be of limited relevance without support from Berlin. Focusing on Germany's potential role in elaborating and implementing a new Ostpolitik raises key analytical questions: What is Germany's potential impact on a new Ostpolitik, and what German interests and actors would be involved? In considering this new foreign policy agenda, one must focus on the current state of affairs as well as on the strategic concepts that will shape future policy. This paper examines the potential impact of German foreign policy toward Eastern Europe and provides a critical assessment of other national and international actors involved.