The Balkans and the Black Sea Region:
Problems, Potentials and Policy Options 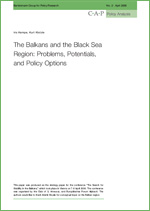 
In the decade and a half since Western leaders began to sketch out their vision of a Europe whole and free, the European Union and NATO have succeeded in extending a zone of security and stability across much of the continent. However, two key regions  the Balkans and the Black Sea  are not yet fully incorporated into this vision, and the lack of coherent strategies addressing these regions threatens to prevent Europe from achieving its full potential.

The Balkans and the Black Sea region are characterised by numerous common risks and challenges, including fragile statehood, a shared history of violent conflict, unconsolidated democratisation and economic underdevelopment. Given the crucial geopolitical position of both regions as (a) direct neighbours to the EU, NATO, and Russia, (b) a bridge to the Middle East and Central Asia, and (c) an increasingly important energy transport route, instability in either region can have significant ramifications for domestic, regional, and international security.

External actors have developed different policies for the two respective regions. The Western Balkans are on a path toward European integration, albeit with an unclear plan and timetable. The European Union has introduced the European Neighbourhood Policy as a means to prevent new dividing lines within Europe; this policy is directed toward all non-candidate countries in the Black Sea, although its scope is primarily bilateral rather than regional in nature. Russia, pursuing a strategy that combines personalised networks and economic pressure, has yet to develop an attractive policy to promote cooperation in its immediate neighbourhood.

Given the internal challenges and external linkages of the Balkans and Black Sea region, three strategic trajectories for addressing these regions present themselves. Given the diverse and often opposing interests of the various actors involved, business as usual may be the most likely policy outcome. This carries with it numerous risks, however. A more proactive policy that seeks to shape, rather than simply react to, events in both regions would involve intensified engagement, including (a) a clearly formulated plan and timetable for the accession of Western Balkan states into the EU and (b) a more comprehensive policy to address the security, economic, and political needs of the Black Sea region. While intensified engagement represents a desirable policy orientation toward the current challenges in the Balkans and the Black Sea, European leaders and their allies must continue to keep an eye on longer-term processes of Europe-wide integration by engaging in a pan- European debate on Europe's future.