Politics and Identities in Transformation: Europe and Israel 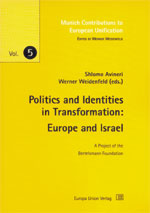 Both Europe and Israel are passing, each in its own way, through a time of ambiguity and uncharted transformations. Historical process and future perspectives are leading to challenges of integration and changing identities in both cases. Despite the fact that these transformations relate, on one hand, to a newly-formed transnational entity and, on the other, to a nation-state, there are striking similarities in the discourse: problems of identity and social transformation intersect with issues of foreign and security policy, environmental issues criss-cross into ethnic and religious ideologies, and in both cases, the quest for identity is under the constant pressure of change which sometimes brings about unforeseen results.

"Politics and Identities in Transformation: Europe and Israel" was the subject of a European Conference held in Kibbutz Kiryat Anavim in Israel on 21-22 January, 2000. This volume is based on the papers submitted at the conference, which was part of the project "European Policy Network at Israeli Universities, " held under the joint auspices of the Bertelsmann Foundation, Guetersloh, the Center for Applied Policy Research in Munich and the Helmut Kohl Institute for European Studies at the Hebrew University of Jerusalem. This conference was a sequel to an earlier Junior Round Table on "Identity and Integration: Europe and Israel" held a year earlier, and since then published as Integration and Identity: Challenges to Europe and Israel edited by Shlomo Avineri and Werner Weidenfeld.

Out of the variety of issues confronting politics in Europe and Israel, we chose to focus on two aspects that have a common denominator in that they relate to post-communist realities in Eastern Europe. In the European case, this was the issue of the eastward enlargement of the European Union. Some of the European papers addressed problems of identity and culture in an enlarged European Union which will include countries which have experienced decades of Soviet-style communism and also bring with them a specific set of traditions regarding ethnicity and religion which differ, at least partially, from those of post-World War II Western Europe. The awareness of the centrality of these issues has been underlined in the last decade by the tragic developments in the former Yugoslavia; while Bosnia and Kosovo were addressed at this conference directly, they were certainly present as a backdrop to the discourse.

In the Israeli case, we chose to focus on the meaning and impact of the recent massive immigration of almost one million Jews from the former Soviet Union to Israel. Recent Russian-speaking immigrants now make up almost 20% of the Jewish population of Israel, and as the Israeli papers presented at the conference suggest, they have had a profound impact on Israeli politics, culture and society. In this context, papers were also presented which addressed foreign policy issues regarding Russian-Israeli relations.

Besides the academic papers presented, the conference participants, coming from ten countries, also listened to two keynote speeches by Israeli politicians directly involved with the challenges confronting both the new immigrants in Israel and an Israeli society trying to deal with such a massive immigration over a short period of time. Professor Yael Tamir, then Minister of Immigrant Integration, candidly and openly addressed the enormous challenges facing both Israeli society and governmental agencies in addressing these issues, and was surprisingly frank in admitting the many misconceptions and mistakes involved in the policies adopted and their implementation. Mr Roman Bronfman, Member of the Knesset for the Democratic Choice Party (one of the three Israeli parties mainly drawing their support from immigrants from the CIS countries) brought his own perspectives about both the successes and shortcomings of the process of integration.

Since the conference, the European Union has witnessed the vicissitudes caused by the inclusion of the Haider-led Freedom Party in Austria into the government, as well as the inconclusive outcome of the Nice Summit. More significantly, and certainly more painfully, Israel has witnessed the breakdown of the Oslo process after the failure of the Camp David Summit and the resulting defeat of Prime Minister Ehud Barak in the 6 February 2001 elections. While Israel is once again drawn into agonizing issues of existential turmoil and choice, the issues discussed at Kiryat Anavim will continue to accompany any future Israeli government, regardless of the direction of the peace process. These are structural developments, which lead to a more pluralistic and multicultural Israeli society - just as European Union enlargement will have to address similar challenges in an ever changing European mosaic.

Prof. Dr. Werner Weidenfeld, Member of the Board of the
Bertelsmann Foundation, Director, Center for Applied Policy Research of Jerusalem University of Munich