Reluctant and unambitious in a Middle Eastern imbroglio 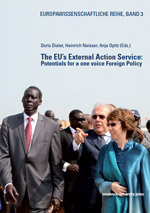 
C·A·P Researcher Edmund Ratka has co-authored, together with Christine Straßmaier (MEIA Research), a chapter on the European Union's policy towards the Syrian crisis in a new book which delves into the European External Action Service (EEAS). Ratka and Straßmaier argue that, its laudable humanitarian and mediation efforts notwithstanding, the European Union has largely failed with regard to Syria and missed an opportunity to affirm itself as a comprehensive foreign policy actor on the international scene. For now, the European External Action Service did not manage to unite the member states and create a decisive and consistent action in the admittedly very difficult case of Syria.

The chapter, entiteld "The European Union and Syria - reluctant and unambitious in a Middle Eastern imbroglio", discusses six dimensions of (potential) European action: Declarations and sanctions, humanitarian aid, mediation efforts, support for the political opposition, military support and the question of military intervention. In each section, the respective situation “on the ground” in Syria is presented, followed by an analysis and evaluation of what the EU has – or has not – done.

The volume "The EU's External Action Service: Potentials for a one voice Foreign Policy" is edited by Doris Dialer, Heinrich Neisser and Anja Opitz and published by Innsbruck University Press. It will be released on February 5, 2014. For more information and ordering, please see: