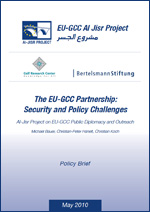 
Regional Security in the Gulf: From Conflict to Cooperation?

The Gulf constitutes a sub-complex of the greater Middle Eastern regional system with its own distinct security-political practices and challenges. It includes three regional great powers, i.e. Iran, Iraq, and Saudi Arabia, as well as regional small powers, such as Kuwait, Bahrain, Qatar, the United Arab Emirates, and Oman. Somewhat on the regional margins is Yemen, often regarded as a fragile state more concerned with its own domestic affairs than regional or international politics.

Since the emergence of the Gulf region as a geo-strategic space, it has gained a prominent place on the international security agenda. For this reason, various external actors have continuously played an important role in regional affairs. After the First World War, the UK was the main actor in terms of ensuring regional stability and guaranteeing Western strategic interests. Following the British withdrawal from its territories East of Suez in the early 1970s, the US took over the role of an external balancer, cooperating with regional allies but also becoming ever-more militarily engaged in order to preserve the Gulfs precarious stability.

A series of critical events  the Iranian Revolution of 1979, the Soviet Unions invasion of Afghanistan in December 1979, the eight-year long Iran-Iraq War from 1980 until 1988, Saddam Husseins invasion of Kuwait in August 1990 and the resulting US Operation Desert Storm in January and February 1991  intensified American engagement and led to the permanent stationing of troops in the region. In the 1990s, the US introduced a policy of dual-containment  an attempt to maintain regional stability by keeping both Iraq and Iran in check. Hence, whereas in many other regions of the world, the end of the Cold War resulted in a (not always successful) political process to replace balance of power practices with more cooperative security structures, the Gulf witnessed basically a continuation of the past.

After the terrorist attacks of September 11, 2001, and with the increasing influence of neoconservative thinking in Washington, the US strategy towards the Gulf took another turn: active regime change in Iraq became a viable option that was both quickly formulated and implemented. The 2003 US-led invasion of Iraq removed Saddam Hussein. Washington policy-makers envisaged that Saddams regime would be replaced by a liberal and democratic government that would serve as an example for other countries in the region, essentially generating a democratic domino effect. The failure of this strategy, however, became quickly apparent as the inability of the USled coalition forces to establish a post-invasion order ultimately led to chaos and civil war-like conditions in Iraq and resulted in the final dismantling of the balance of power in the Gulf. The consequent uncertainty regarding the regional actors strategic ambitions was aggravated by the absence of a functioning framework in which security issues could be addressed.