Europe and the Gulf Region - Towards a New Horizon

Europe and the Gulf Region - Towards a New Horizon, Discussion paper - revised version - presented at the 12th Kronberg Talks - Special Edition, Riyadh, May 11th12th, 2009. Jointly organized by the King Faisal Center for Research and Islamic Studies, the Institute of Diplomatic Studies, and the Bertelsmann Stiftung. 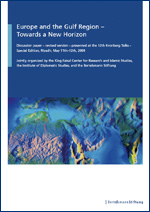 However, every crisis also contains the seeds of a new beginning. Hence the EU and the GCC should interpret the turmoil as a chance to contribute to the establishment of an international order that is based on the principle of sustainability and facilitates increased participation and the development of every state and region. In the realm of economics this  means that international finance requires political regulation and needs to be more in touch with the real economy. Moreover, a changed paradigm of economic growth would have to  include ecological, social and cultural considerations. With regard to international security policy it implies an international order that is based on a wider concept of security that goes beyond the state as the target of security, and the use of military capabilities as the major tool of security policy. The security risks of the 21st century include diverse issues such as regional conflicts, terrorism, proliferation of weapons of mass destruction, and state failure. Tackling these challenges requires collective action on an international scale and a cooperative understanding of security policy.

Todays crisis is also a crisis of global governance. Global institutions need to be readjusted in order to keep up with the challenges of economic globalization, the emergence of transnational security risks, and shifts in political power. Debates about reforming the United Nations (UN) and institutions such as the International Monetary Fund (IMF) or the international trade regime have been going on for quite some time. Against this background the G20 has established itself as the new forum for global economic leadership. Yet global governance cannot be left entirely to global institutions. Given that many political issues emanate from the regional level, regional security arrangements and regional economic integration will have to play a major role in the reordering of the international economy and the international security architecture.

Europe and the Arab Gulf states possess the political, economic, and cultural resources needed to make a substantial contribution to overcoming the global crisis and to supporting either the establishment of new or the readjustment of existing institutional structures. This would be even more the case if they were to coordinate their efforts to deal with the issues of common concern and, where appropriate, to interact with their international partners, in particular the US. The consolidation of relations between the EU and the GCC is a precondition for going beyond ad hoc cooperation and achieving sustainable results. In order to accomplish their own goals and for the sake of international order, Europe and the GCC should assume increased responsibility in international affairs.