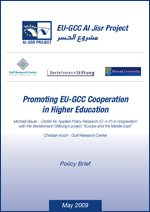 
Based on the UNESCO Education for All Framework of 1999 and in response to the seminal Arab Human Development Report of 2003, the GCC states have developed numerous strategy papers to reform their education systems. The promotion of social and human development through education has in fact became a national priority among GCC member states based on the acknowledgment that without action, the knowledge gap between the Arab world and the rest of the world would only grow further. As a result of this assessment, all the GCC states have invested considerable political and financial resources to modernize and expand their education sectors.

In conjunction with the rising importance of education, the Euro-Gulf Research Unit at Kuwait University, the Bertelsmann Stiftung, and the Gulf Research Center, within the framework of the Al-Jisr Project on EU-GCC Public Diplomacy and Outreach Activities, held an expert workshop and open forum on March 10-11, 2009 in Kuwait to explore in detail how best to foster and carry forward cooperation in one area of education, that of higher education. The discussion highlighted that the EU and the GCC states face many of the same issues in terms of the development of their educational institutions, the proper dissemination of knowledge, quality and equality within education, and modernization of their systems. Both sides also appear to be aware that the task of building knowledge societies is an ongoing process and as such are increasingly committed to forge new areas of cooperation and exchange.

As a result of this workshop, the Al-Jisr Project has put together concrete policy suggestions that should be contemplated by officials and policy practitioners from both the European and the Gulf sides when it comes to devising new programs of cooperation. The following policy recommendations elaborate suggestions on how both the EU and the GCC should seek to engage with various facets of reform efforts. Among the key components put forward for consideration are twinning programs, regular working groups, summer programs, joint applications for research funding, establishing a partnership for research exchange, developing a network of cooperation within the GCC, and establishing programs in the fieldsofqualityassurance, teacher training and teacher mobility. Taken together, this can evolve into a concrete and holistic plan for action as far as cooperation in higher education between the GCC and the EU is concerned.