The Eastern Partnership - "ENP plus" for Europe's Eastern neighbors 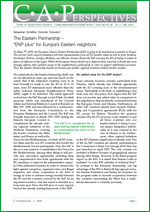 Our fourth issue in 2009: On May 7th, 2009, the European Unions Eastern Partnership (EaP) is going to be launched at a summit in Prague. The current Czech council presidency will host representatives from all EU member states as well as from Armenia, Azerbaijan, Belarus, Georgia, Moldova, and Ukraine. Russia objects the EaP, accusing the EU of trying to widen its sphere of influence in the region. While the European Union should try to disperse these concerns it should also more strongly address other political issues in the neighborhood, particularly in order to support stabilization processes. Thus, the Eastern Partnership should not become just another regional initiative without further surplus.

Why the EU Should Differentiate More Within the Eastern Partnership
C·A·Perspectives · 1 · 2014
17.10.2014 · Christoph Schnellbach