Elections to the EP in 2009: Youth, Europe and the role of peer-group activities

Eva Feldmann-Wojtachnia: Elections to the EP in 2009: Youth, Europe and the role of peer-group activities
C·A·P Aktuell · 3 · 2008 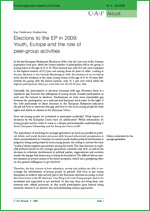 
In the last European Parliament Election in 2004, only 43,7 per cent of the German population took part, while the lowest number of participation fell in the group of young voters at the age of 21 to 25. Their turnout was only 30,5 per cent compared to the highest number of 51,9 per cent among those 60 years or older. Looking at the last elections to the German Bundestag in 2005, the situation is not as bad as such, but the tendency is the same: young voters at the age of 21 to 25 were definitively the group with the lowest turnout: only 70, 2 per cent voted, while the highest participations (84,6 per cent) falls into the 50-60 year olds.

Generally, the participation in elections increases with age. However, there is a significant gap between the willingness of young people towards participation as such and the turnout in elections. Furthermore, an even more remarkable gap between the participation on a national and European level exists. In the light of the 3oth anniversary of direct elections to the European Parliament education should ask how to overcome this gap and how to win more young people for their rights and duties as citizens in the European Union ...