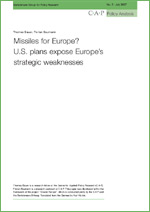 
The debate over U.S. plans to construct a missile defense system reveals the complexity and multi-layered character of political processes at the beginning of the 21st century. To a great extent, however, the debate has much less to do with the defense system itself than with the safeguarding of particularistic interests either on the international stage or within domestic disputes between political parties. On the one hand, Russia is seeking to strengthen its position within its former Soviet sphere of influence and is striving to reclaim its role as a global actor. On the other hand, parts of the German Social Democratic Party (SPD) are attempting to use the debate as a means to return the SPD to its roots as a peace party. Additional key issues include unresolved questions about the respective roles of NATO and the European Union within the fields of security and defense policy as well as divergent perceptions of the threat posed by Irans nuclear and missile programs.

After setting out the core components of the debate and examining the main factors and issues that lie beneath the surface of the discussion, this paper arrives at the following conclusion: continuing efforts to construct a comprehensive missile defense system must be carried out within the framework of NATO in cooperation with Russia. Only a common solution can prevent the further erosion of trust. In addition, this approach could also serve to bring the United States back into the collective fold of NATO. Furthermore, a new strategic agreement between the EU and NATO should be considered; this agreement should focus on defense policy issues and directly address the question of territorial missile defense. In this process, however, the EU must define its strategic interests within the global system and assert these interests vigorously. Finally, within the German domestic debate, policymakers must reach out more effectively to citizens - and involve them in policy discussions - in order to be able to develop convincing explanations for the policies they pursue in the 21st century.