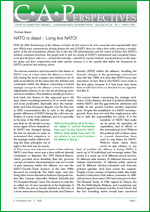 Our second issue in 2009: With the 60th Anniversary of the alliance at hand, its fate seems to be more uncertain and unpredictable than ever. While some commentaries already foresee the end of NATO, there are others that rather portray a revitalization of the old transatlantic alliance due to the new US-administration and the return of France into NATO's military command structures. But people tend to look too closely at NATOs institutional and conceptual framework and the future risks it is  at least theoretically  intended to counter. Instead, one should focus on the member states and their relationship with other parties, because it is the capitols that define the framework for NATO's political and military action.