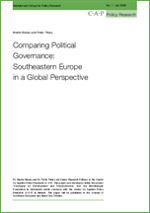 
The literature on the quality of democracy, market economy and political management in the new democracies of Southeastern Europe has raised three main doubts and concerns. First, democracy in Southeast Europe has turned into power struggles among elites largely isolated from a citizenry that is increasingly disaffected with democracy and susceptible to populist and radical political forces. Second, the institutions of market economy are undermined by the rise of the informal economy and widening social disparities. Third, lacking safe electoral majorities and a sufficiently realistic prospect of EU membership, liberal and Western-oriented political actors have failed to sustain democratic and economic reforms.

This paper uses the findings of the Bertelsmann Transformation Index, a global ranking of democracy, market economy and political management, to discuss these hypotheses. We compare the performance profiles for Albania, Bosnia and Herzegovina, Croatia, the Former Yugoslav Republic of Macedonia and Serbia and Montenegro, analyzing the trajectories of these countries over time and in comparison with other Southeast European, East Central European and Latin American democracies.

The paper shows that there is an evident public disappointment with the performance of democratic institutions, coupled with weak intermediary organizations and significant populist or nationalist voices, but this belongs to an interplay of mutually reinforcing defects that can also be observed in Latin American countries. Western Balkan countries are characterized by significant informal sectors, increasing social inequalities and fragile or insufficient electoral majorities for liberal reformers, but market reforms have so far been continued and economic performance has improved.

The management performance of Albania, Bosnia, Macedonia and Serbia for all four management criteria is more than two points weaker than the average for East Central Europe including Bulgaria, Croatia and Romania. This suggests that the four problem countries from the Western Balkans not only lag behind in the development of democracy and market economy, but also lack sufficient governance capacities to catch up with East Central Europe. Developing these capacities appears to be the key to sustainable conflict settlements and to EU membership strategies for this part of Europe.