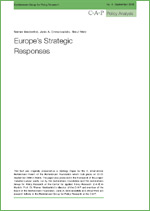 
Europe has two faces. On the one hand, there was a time when Europeans were enchanted by the miracle of integration. After having experienced bitter centuries of war and enmity, imperial devastation, and outbursts of nationalism, the nations of Europe had begun to move in precisely the opposite direction.Yet, although the European success story continues to this day, it also resembles the description of a distant epoch. Perceptions of the European Union are increasingly characterized by a resurgence of national egoism and declining levels of public approval.

In this situation it is helpful to recall the problem at the heart of the issue of integration, which is the conceptual schism among the member states. Contradictory and irreconcilable attitudes toward the future of Europe confront each other. The arguments are ostensibly about treaty texts, though deep down it is a matter of antagonistic views of the shape of things to come. If it proves impossible to reach some kind of agreement about the future political order of the continent, the Europe of 25 and soon more member states may well go into decline, and may possibly even fall apart. This problem cannot be resolved until the issue has been openly discussed.

The principal strategic question concerning the future of the EU continues to remain unanswered.Why is there a need to undertake new efforts, why is it necessary to mobilize new powers? The answer to this question is linked to the new constellations and conditions of world politics. It has to do with Europes ability to shape developments in a new global order. Europes future is increasingly being determined by developments taking place beyond its borders. There is a danger that the old continent will gradually become marginalized. Europe must not only react to these developments, it also has the potential to inject its own ideas into the formulation of the rules governing the new economic and political world order.

Both Europes ability to exert its influence and the fate of the European continent depend on whether the Europeans will be able to renew the "European answer" in a manner that enables them to respond effectively to future challenges. Providing Europe with a new raison dêtre requires the EU to assert itself both internally and externally, and to clearly communicate the reasons for further European integration to citizens.